On Tuesday May 28th, the eyes of the world were on the Practica di Mare military airbase in Italy where NATO and Russia signed an agreement symbolizing the end of the Cold War. But, beneath the back-patting and the high powered speeches about "the former foes and superpowers overcoming 50 years of division and uncertainty" there was in fact a great deal of uncertainty regarding the future of the newly set up NATO-Russia Council and, indeed, the future role of NATO itself in a fast changing world. Daniela Lazarova has the story. 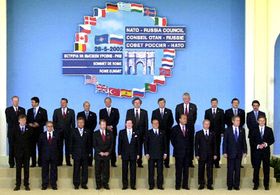 NATO summit in Italy, photo: CTK Among the nineteen NATO members present at the ceremony were the latest newcomers to the alliance - the Czech Republic, Poland and Hungary - all of whom were released from Russian domination just over a decade ago and who sought NATO's umbrella as a form of protection against further threat from the East. For these countries' heads of state the ceremony of welcoming Russia as an ally, just three years after their own admission to NATO, must have seemed somewhat surreal. And, not surprisingly, the first question President Havel was asked on descending from his plane at Prague's Ruzyne Airport was:

Mr. President how do you feel about NATO now that Russia has a foot in the door?

"I don't think anyone has lost any independence in decision making, neither the United States, nor NATO nor the Czech Republic. NATO and Russia have signed a new type of cooperation which is good news but this does not in any way restrict their future decision making as separate entities." 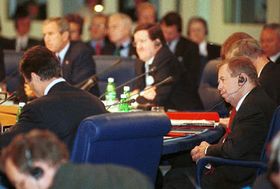 Vaclav Havel (right), photo: CTK President Havel, who has repeatedly expressed the opinion that Russia can be an ally but never a member of NATO, said he hoped the new Council would prove useful in fighting global threats such as international terrorism, weapons proliferation, organized crime and drug trafficking.

Meanwhile, Czech commentators view the new council with a heavy dose of skepticism. Many feel that the institution is a barter chip in return for Moscow's acceptance of NATO's planned expansion eastward, to be announced at the November summit here in Prague. However there seems to be general agreement here that Moscow wants a bigger role in international decision making and will only respect the council as long as it can play a real role. As one commentator says: the 19- plus-one arrangement which NATO offered Russia in 1997 to console Moscow for NATO's first enlargement lasted for exactly five years. It remains to be seen how long this one will survive.