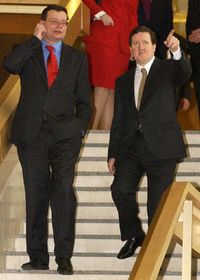 George Robertson (right), photo CTK "I'm delighted to be here this morning in Prague and I'm hugely impressed by this facility and by the arrangements that have been made by the Czech government. The summit arrangements are 100 percent on track and I'm extremely pleased with the way in which all the elements of this huge jigsaw are now being put in place."

But there have also been concerns over security at the summit. Lord Robertson was asked whether the alliance would be taking steps to screen all those people working at the summit, seeing as the Czech Republic still lacks comprehensive legislation on security screening for sensitive data. The Secretary General refused to be drawn on the issue. 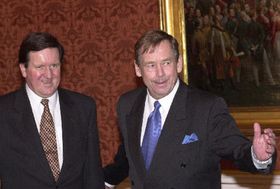 George Robertson and Vaclav Havel, photo CTK There will be two main points on NATO's agenda in November - the admission of new members, and transforming the Alliance to meet the new security challenges arising from a post-September 11th world. Lord Robertson told reporters the Prague summit would be a historic one.

"This summit meeting will be one of NATO's defining moments, because the decisions to be taken here in this conference hall in November will shape the Alliance for many, many years to come. NATO will adapt itself at this summit meeting to being the same successful defence alliance that it has been for 53 years. But also a security-shaping organisation, interested in making the world safer and better for future generations. And doing it in association not just with its own members, but with the wider partnership that we have built up over the years."

The Secretary General of NATO, George Robertson, on preparations for the NATO summit in Prague.