Sparta Prague ice hockey club celebrated its 100th year anniversary this year, making it one of the oldest sports clubs in Europe. It was in January 1904 that the club formed its first ice hockey team, which met on frozen lakes and ponds around Prague. Now a new book has just been published, documenting Sparta's long and very interesting history.

Sparta Prague ice hockey club celebrated its 100th year anniversary this year, making it one of the oldest sports clubs in Europe. It was in January 1904 that the club formed its first ice hockey team, which met on frozen lakes and ponds around Prague. They even had a tournament that year - which they had to end early because the ice started to melt.

Czech journalist David Soeldner recently took on the task of documenting the 100 years of the hockey club's existence in a new book called "Our Blood is Sparta", to commemorate the anniversary.

For Soeldner, who has been following Sparta since he was a child, making this book was a labour of love. But all the hard work was worth it- to convey a glimpse into the history this club has survived: two world wars, a communist regime, and political and social upheaval.

"The beginning of the century is the best part of book - because it's the first time it's possible to have photos of this club during the First World War, and the Second World War. There are some crazy stories and crazy games."

Petr Briza is the goalkeeper for Sparta. At the age of 40 - he is one of the most famous and highly respected goal keepers in the Czech Republic. For him, the book is a reminder of the Sparta players who came before him:

"Sometimes you have to smile when you see the old jerseys, and the old equipment, and I think everybody must give respect to those guys - because everything was totally different from medical treatment and from technical staff. They were just playing hockey with big enthusiasm and just respect."

But what makes Sparta, Sparta? And why is this club so special? I decided to try and find out. 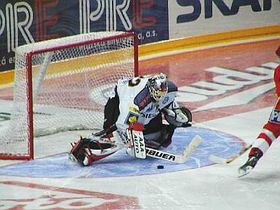 Petr Briza, photo: www.hcsparta.cz Lubos Kozeluh has been the general manager of the club for the last three years.

"Sparta is a legend - the biggest and most well known team in the Czech Republic. A few of the best Czech ice hockey players were brought up in Sparta - Tikal, Gut, Holecek, Hrdina. It's unusual for any sports clubs that it would survive 100 years and would go through all these changes - from beginning of 19th century, wars, communist regime, then all these changes and Sparta remains Sparta.

Later I spoke to former Sparta player Stanislav Hajdusek, to find out his answer to the same question.

"Well that's a good question - you know, it's not easy to play for Sparta Prague because it's a famous team, it's a name, it's a history, it's a really something special. Sparta always requires players who will be able to put their heart on the ice, and always prefers really tough hockey."

Hajdusek said playing for Sparta meant being in the spotlight and handling a lot of pressures - even political ones:

"From everywhere. From journalists, coaches - because in the 80s, it was the team about which everybody said, ok the government takes care of Sparta Prague. The leaders from the system they watched the games, they visited games, and that was the pressure from national coaches - you know, it was really something special to play for Sparta Prague."

The communist system posed big challenges for this Sparta player and his family:

"When it was the Communist system, everybody had to stay here. It was not possible to play outside the country. You could escape, but think about the problems which you could have - in '81 I got a great offer from Buffalo Sabres, after the Canada Cup - I was sitting in the hotel room and I was thinking whether to escape or not. I was just a few years married, with just one child you know, a daughter, and then think about the problems which I would make for my parents and my brothers."

Finally, I asked Stanislav Hajdusek whether Sparta has changed much:

"It's quite different you know, the hockey is much faster, it's more skates, it's different. Well, I think the professionalism - it's the same. You have to be professional - you have to work very hard, put your heart on the ice, and be proud of the 'S' on your breast." 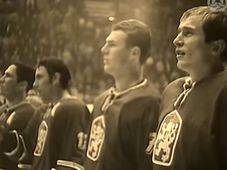 How Czechoslovakia’s ‘moral victory’ on ice triggered the Hockey Riots, onset of ‘Normalisation’

Exactly 50 years ago today, the Czechoslovak national ice hockey team beat the Soviets in the world championships for a second time,…