President Miloš Zeman on Tuesday appointed Lubomír Zaorálek to the post of culture minister, ending a drawn-out dispute over who should manage the arts portfolio. The seasoned Social Democrat, who has previously served as the country’s foreign minister, stressed the need to recognize the huge potential of the arts sphere and said he was not afraid to cross swords with the president in fulfilling his goals. 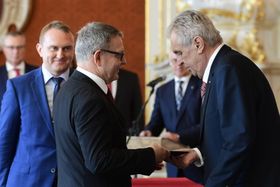 Lubomír Zaorálek, Miloš Zeman, photo: ČTK/Roman Vondrouš Cameras snapped as the new culture minister took his oath of office in the ceremonial Throne Hall at Prague Castle. A former speaker of the lower house and former foreign minister, Zaorálek was not a likely candidate to head the arts portfolio. He was nominated as a trouble-shooter at a time when the Social Democrats’ open conflict with the president reached what he himself called “unbearable proportions” and the party was a step away from quitting the cabinet. Under pressure to produce a second nominee for the post of culture minister party boss Jan Hamáček opted for a man whom President Zeman would find it hard to turn down, a career politician with years of experience behind him.

Now Lubomír Zaorálek is not only expected to stabilize the hard-tried cultural sector, in which his predecessor effected a number of shake-ups, but to erase the impression that the president had won this conflict hands-down and the Social Democrats no longer control one of their government portfolios.

Following talks with President Zeman on Monday, Lubomír Zaorálek was confident he was up to the task, telling journalists that he and the president had a number of common priorities, but that there were areas in which they might meet heads on. “I warned him to think twice about naming me to the post” Zaorálek noted, adding that his work relationship with the president goes back many years and they know plenty about each other’s views. He made it clear that some of the more controversial decisions made by his predecessor would be reviewed, including the sacking of the National Gallery head, Jiři Fajt, which many critics believe was made at the president’s behest.

“I informed the president that I would be consulting experts as regards the change-of-guard at some key cultural posts and reassessing the situation. For instance as regards the National Gallery I think we need to hold a new open competition for the post.” 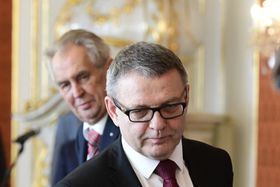 Lubomír Zaorálek, photo: ČTK/Roman Vondrouš Mr. Zaorálek said he would try to raise the profile of the culture ministry and strive to get more money for employees working in the cultural sector. The potential of Czech culture was generally underestimated, Zaorálek noted.

“As a former foreign minister I know well how highly Czech culture is perceived, and how many doors it opened for us. It often happened that thanks to Czech culture we made contacts with the top politicians and leading entrepreneurs of a given country. So I know the potential, the power of Czech culture. We do not use it as we should, in fact we do not even recognize its potential.”

Whether the new Czech culture minister can turn this around remains to be seen. Commentators say that his high profile and his way with words will work in his favour. As commentator Jiří Peňás told Czech Radio “Culture ministers are either bureaucrats or showmen–Lubomír Zaorálek is the latter.”