Prime Minister Andrej Babiš’ new minority government has been sworn in at Prague Castle and will now have a maximum 30 days to find backing in a confidence vote. The prime minister made clear earlier his government was wasting no time getting to work. First up: getting things up and running at the ministries and then a two-day summit in Brussels. 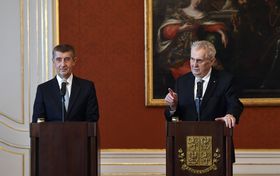 Andrej Babiš et Miloš Zeman, photo: ČTK Fifty-two days since the election the Czech Republic has a new minority government, made up of 14 ministers, four of them women, and the prime minister himself. On Wednesday afternoon, President Miloš Zeman swore in the new cabinet at Prague Castle. He extended congratulations and well-wishes to the new team and made clear he had the government’s back and that even if it failed to get support in the lower house, Prime Minister Babiš, whose ANO was the big winner in the election, would be tasked with a second attempt to form government. President Miloš Zeman:

“Two things that are being claimed is that this will be a ‘winter’ (or short-lived) cabinet. That is not true. I can tell you I will keep my promise and again name Mr Babis prime minister again if the first attempt fails and will give him substantially more time to form another minority or majority government.

“It is also being claimed that this is not a legitimate government if it doesn’t get backing in the lower house. The Constitution recognises governments as legitimate the moment they are sworn in by the president… so you can work and ignore claims stating otherwise.”

How did things appear earlier in the day? 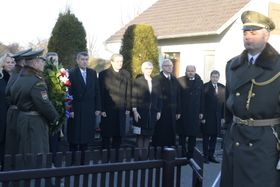 The very first day, the prime minister made clear, the new government, made up of ANO and unaffiliated ministers, had its work cut out for it and the prime minister, at least for the moment, is not dwelling on whether his government was pass a confidence vote (by appearances the cabinet does not have the backing at the moment). Here us what the prime minister told Czech Radio in its Ranní interview program:

“We have to govern. We don’t have time to wait for the confidence vote or to see who will give us backing or join us in government. That’s just not possible. We begin our work today and it will take until 10 in the evening for the team to be installed at their ministries.” 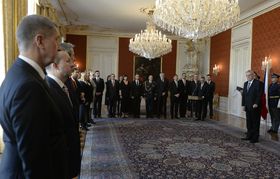 New Czech government, headed by Andrej Babiš, sworn in at Prague Castle, photo: ČTK Not all of the new ministers will be inaugurated on Wednesday ahead of the Brussels summit. Those who will be include Klára Slechotova as defence minister, Martin Stropnický as foreign minister, and Alena Schillerová as the head of finance, along with Lubomír Metnar (interior), Tomáš Huner (industry and trade), Jaroslava Němcová (labour and social affairs), and Adam Vojtěch (health).

Five ministers in the new cabinet held previous ministerial posts in the former government led by the Social Democrats and some, like Justice Minister Robert Pelikán and Transport Minister Dan Ťok, are keeping the same jobs.

Czech Radio reported that the new cabinet will seek a vote of confidence on January 9.