Sometime labelled as anti-European Union, new Czech prime minister Andrej Babiš has chosen Brussels and a crunch European Council meeting as his first foreign trip. And Mr. Babiš says he wants his government to play a much more active role in EU affairs. 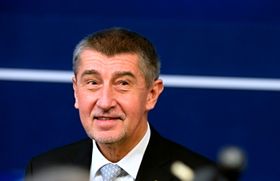 Andrej Babiš, photo: CTK Czech prime minister Andrej Babiš has been labelled already by some sections of the foreign media as anti-EU. His past attacks on the EU quota share out of immigrants across member states, reluctance for the Czech Republic to adopt the euro, and his anger that previous meetings of EU finance ministers didn’t support his tax reform proposals, have undoubtedly fuelled that impression. But it would be more accurate to describe Babis’ stance on the EU as broadly supportive but critical on key policies and convinced that it needs reforms.

And constructively critical is the baggage that the ANO leader is expected to take to a crunch two-day Brussels summit that is scheduled to tackle immigration policy, common EU defense, and a key turning point in the Brexit negotiations.

Following the first official meeting of his new government hours after it had been sworn in on December 13, Babiš explained why he was breaking with tradition that normally puts a visit to the Slovak capital Bratislava before Brussels.

"We have prepared well for this council. It’s of course my first foreign visit [as prime minister]. That visit is usually made to Slovakia but I think that this council is very important and that in Europe we want to be a lot more active than before."

One sour note that precedes the new prime’s Brussels trip is the announcement a week ago that the European Commission would seek court actions against Prague, Warsaw, and Budapest for failing to fulfil an agreed policy that they take their share of illegal immigrants now hosted by Italy and Greece. The Czech Republic accepted just 12 immigrants, the others none, in a move which the Commission and other countries says defies the principle of solidarity. Prime minister Babiš said he would raise the issue but did not expect immediate results.

Jean-Clade Juncker, photo: CTK "I do not expect that with this very heavy programme that we will solve this action against us. We will of course briefly talk about it. But what I expect is that I will write a letter to Mr. [Jean-Clade] Juncker with our arguments and afterwards seek a date for a separate meeting next year and I’d like to meet with the Greek Commissioner."

The Czech leader is pushing another argument that the EU should tackle the immigration problem at source by clamping down on the human traffickers making huge profits from the trade and by boosting support to countries they are fleeing from. And as regards for tackling immigration, Babiš suggested the EU could take some lessons from the systems in place in Canada, the U.S, and Australia.

On defence too, the Czech premier has backed European moves to develop their own policies and capabilities outside NATO and the new defense minister has pledged to push ahead with stalled Czech projects to boost the country’s low spending on the sector.