New exhibition on Rabbi Loew marks 400 years since his death

Few rabbis and Jewish scholars became part of legends of non-Jewish people. But one, Rabbi Judah Loew ben Bezalel who lived in Prague at the turn of the 17th century, has long been part of a Czech national legend which describes the creation of the mythical Golem. The Jewish Museum in Prague has staged an exhibition at Prague Castle to commemorate the life of the great rabbi.

When Rabbi Judah Loew ben Bezalal, known in the Jewish world as the Maharal, died in Prague in September 1609, he was a famous scholar, a great teacher and the only Jewish person ever to receive a personal invitation from Emperor Rudolf II. Much later, a legend emerged that the renowned rabbi had created an artificial being, the Golem. Arno Pařík of the Jewish Museum in Prague is one of curators of the exhibition entitled Path of Life, after one of Rabbi Loew’s books.

“We wanted to show the real life of the Maharal, Rabbi Judah Loew ben Bezalel, because he is known, or his name is known, but everybody knows just the legends about him. So the main goal was to present the reality: what his life was like and what we know really happened. The legends originated much later, a long time after his death, and worked with their own ideas and imagination which does not have much to do with the life of the outstanding rabbi in the 16th century. ”

After serving as the Chief Rabbi of Moravia in the town of Mikulov for some 20 years, Rabbi Loew moved to Prague but only became the Chief Rabbi of Bohemia in 1596. Four years earlier, the eccentric Emperor Rudolf II invited the rabbi to visit him at Prague Castle. The topic of their conversation remains a mystery to date. 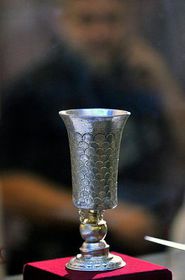 Photo: CTK “This is the point where history and legends come together. They had a talk just between the two of them, so nothing is known about the topic. But most probably, they talked about Jewish mysticism, the Kabbalah, because at the time, Rudolf was very involved in this esoteric mysticism and astronomy, and that was probably why he wanted to talk to Rabbi Loew.”

Besides focusing on the real life of Rabbi Loew, the exhibition also features artefacts from the Emperor’s court, as well as later works on the legends surrounding the famed scholar. And curator Arno Pařík says there is one personal artefact that belonged to the rabbi himself.

“I think there is only one such object – the cup of Rabbi Loew, which is a very nice silverwork from the end of the 16th century, and which was kept for centuries by the Jewish community in Mikulov as a relic, as the cup that once belonged to Rabbi Loew.”

The exhibition Path of Life runs at the Imperial Stables at Prague Castle until November 8. You can find more details at www.jewishmuseum.cz 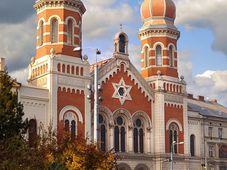 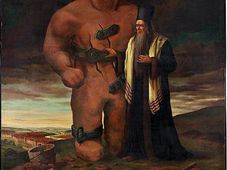 Rabbi Loew, the Jewish hero of the Czechs