A new exhibition at Prague’s Municipal Museum recalls the days when people only had one day off a week, but really knew how to make the most of it. Entitled Prague Restaurants on Days Out, it shows the largely disappeared world of hostelries where people would stop for refreshment at the end of a day-trip from the capital. Radio Prague spoke to the exhibition’s curator, Tomáš Dvořák, to find out more. “The exhibition is about trips out of Prague by various kinds of public transport like trains, steamboats and trams. We wanted to present the lifestyle particularly in the 1920s and ‘30s. We have many interesting interactive things here, and part of the exhibition is an actual period restaurant where people can get refreshments after they see the exhibit.”

Talking about interactive features – we are now sitting in what looks like an old train compartment. What can people see here?

“Here, people can see a lot of photos. We have a really large collection of photos and we didn’t want to just print them. So we decided to present them in a slide show; here in the train compartment, you can sit down and it’s like a train ride.”

What about the restaurants themselves? What was special about them?

“They were usually garden restaurants, typically with a beer garden. They were often situated in parks, or near some woods in the countryside around Prague. In Prague, they were also on some of the islands in the Vltava, like in Žofín and Střelecký ostrov. They also often hosted concerts, especially by military bands. That was very popular.

Are any of these restaurants still around? What happened to them after WWII?

“They were mostly nationalized. Some of them were still run by their former owners who were employed there, which was bit strange. But most of them closed down when their owners died. Communism was not a good time for private enterprise, and these restaurants very much depended on private business.” 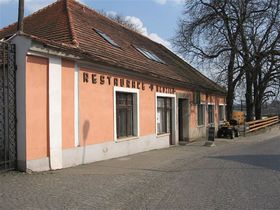 U Neužilů Are there any that have survived?

“Yes, several. For instance we have a lot of exhibits from a very nice restaurant in Slapy. It’s a family restaurant called U Neužilů which was established more than 100 years ago. Now the family runs it once again.”