This weekend the small but increasingly popular Kocour brewery, based in Varnsdorf, north Bohemia, will be hosting the first ever Ale festivale – a festival highlighting local and foreign specialty beers. Kocour (which means tomcat in English) itself produces 10 different styles based on differences in ingredients, production and history and want to let the average consumer know there’s more to beer than just their usual brand. 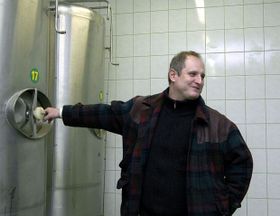 Honza Kočka, photo: www.pivovar-kocour.cz A little earlier I spoke to the brewery’s co-founder Honza Kočka (whose name means cat in Czech, no coincidence there) about its mission.

“The main concept is to show people that beer is more than just a pale lager or cheap, chilled bottled in the fridge, that there are dozens of beer styles worldwide that can be enjoyed by the Czech consumer. They can be bitter to extremely bitter or even sweet. In short, there is a beer for every event. Ninety-nine percent of the Czech beer market is about lager; we are trying to educate local drinkers about the different varieties.”

You are based in the north of the country (although some pubs have your product on tap in the capital); is the market different there?

“Of course. Locals mostly consume pale lager, whereas Prague offers more pubs with more variety on tap and change beers on offer. Fortunately this new trend with rotating pipes is becoming more and more widespread, not just in the capital but also in smaller cities.

“This is what we are going to do in our own pub here, set to open in a couple weeks: we will have sixteen taps, introducing different brewers both small and big, from here and from abroad. So we will teach people and basically there should be more places like this. Hopefully within a few years there will be more and more places like this in small or mid-sized cities.”

This weekend your brewery will be holding a festival following along - I imagine - the lines of what you are describing? 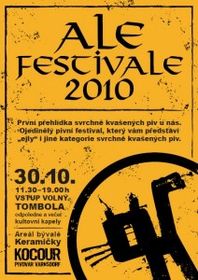 “Yes, because there are many beer festivals in our country as such but none of them focus on top-fermented beers. As we are the No.1 producer of different beer styles in this country, we thought we should be the first to hold an event of this kind. We invited all the importers, including from Germany and Belgium, but also producers. And people who visit will have a chance to taste between 60 – 70 beers.

“Basically what we do when I organise my own tasting is say ‘Okay, in half-an-hour we are going to try this-and-this beer’ and you can compare your impression with that of a professional. The glasses are smaller (not half-litre) so it isn’t about ‘amount’. The idea is for people to think about what they are drinking.”