New group wants "rockets not radars" - but are they serious?

There has been a great deal of talk in the last couple of months about US plans to build part of its anti-missile defence shield - a radar - here in the Czech Republic. Prime Minister Mirek Topolanek welcomes the idea, though the Czech government has yet to reach a decision on the issue. In the meantime, there have been a number of demonstrations against the radar base. Now, however, a new civic group has emerged with the title "we don't want radars, we want rockets". Is this some practical joke, or are they serious? That's a question I put to spokesman Martin Kotas. 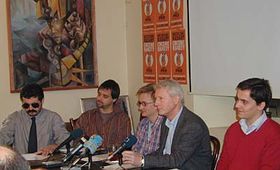 "We mean it seriously of course. But we decided to exaggerate a bit, because it seems to us that the debate on the radar base is too emotional - it's desperate. People are over concerned with the technical details - what concerns us is the principle. We want politicians to inform people what it will really mean."

According to the website of "we don't want radars, we want rockets", the Czech Republic needs to bear its share of responsibility for international security. Some might say, though, that the country is already doing so, with membership of NATO and participation in military operations in Iraq and Afghanistan.

"I'm not saying that isn't enough. But if someone calls on us for help, I'm in favour of acting. I think the Czech Republic has behaved surprisingly responsibly towards its partners in recent years. Now the Americans have asked us to host this radar base and I trust that Czech politicians and politicians in Europe and the US will discuss what is a reasonable issue."

One reason some Czechs give for not supporting the building of a US radar base is that it could make the Czech Republic a bigger target for terrorists. Prime Minister Topolanek says that, on the contrary, it will make the country safer. What is the position of "we don't want radars, we want rockets"?

"Well, I think if you're talking about us being a target...we had a foreign army here, the Soviet army, after 1968...and I think we are being much more provocative by our participation in Iraq, in Kosovo, in Afghanistan, which, by the way, I am in favour of. It's a far greater provocation when our army is on foreign soil than when a foreign radar is on our soil."

"We don't want radars, we want rockets" are holding a demonstration in Prague next Monday.

Russian President Dmitri Medvedev arrives in Prague on Wednesday at the invitation of Czech President Václav Klaus. His short visit…

Schwarzenberg meets with Clinton on official visit to the US

The Minister of Foreign Affairs, Karel Schwarzenberg, is wrapping up a brief, official visit to the United States where he met with…