Coinciding with the 70th anniversary of the Nazi invasion of Czechoslovakia, the discovery of a number of never-before-seen documents and photographs was announced at the weekend. The new materials shed further light on Hitler’s invasion visit, which ended on this day in 1939. 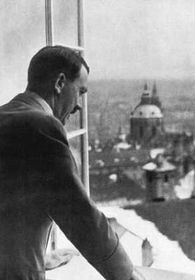 Adolf Hitler in Prague The photographs, very small contact prints that had been lying forgotten in the Prague City Archives since the end of the war, were rediscovered by historian Dr. Jan Uhlíř in cooperation with the Archives as he prepared to write a book on the subject of the invasion. Dr. Uhlíř himself describes the discovery and its relevance:

“In the vast majority of cases the photographs show the interiors of Prague Castle, celebratory reception halls, where we look into the faces of the leading representatives of the Third Reich, both the ones from Berlin and those who later had the Protectorate of Bohemia and Moravia in their hands. I don’t know why no one else got to them since the end of the Second World War, but whatever the case, we can now very nicely distinguish between individual high-echelon players who played pivotal roles in the occupation of Bohemia and Moravia in 1939.”

This is the disgraced and defeated mastermind of the Second World War at the peak of his game, speaking of “his greatest achievement” and himself “as the greatest German in history”. The photographs, most of which were made by Hitler’s personal photographer and propagandist Heinrich Hoffman, capture a beaming Fuhrer at ease in Prague Castle on the day of his arrival in occupied Prague, signing orders on the fate of the Bohemian Protectorate and conversing with his commanders.

In the course of his research, Dr. Uhlíř also came up with a wealth of documents illuminating events that occurred during the invasion, memories that had long been forgotten, such as the memoirs of the deputy to the German legation, Andor Hencke, who for example left historically captivating comments on the rising dictator’s visit to the conquered Czech capital. Emil Hácha and Adolf Hitler “Hitler was rather hungry when he arrived in Prague, so they prepared a banquet for him and set a large table. But Hitler was delayed for a long time and by the time he arrived the staff of General Blaskowitz had come and devoured their Führer’s feast to the last crumb.”

Another story relates how Hitler, the ostensible architecture aficionado, had his triumphal view of Prague from the Castle windows spoilt by the 19th century mini-Eiffel tower on Petřín hill and left the following order: “The lookout tower on that hill has to go. It spoils the overall effect.” Luckily Petřín was subsequently forgotten in the pursuit of world domination, and the famous landmark remains to this day.

The Czech Republic and Slovakia are this year marking the 70th anniversary of one of the most painful events in their histories, and the discovery of these photos is a small but potent step forward for historians. For all its notoriety and even living eye-witnesses today, there are still gaps in the understanding of WWII and Czech historians are still in the process of filling them. Dr. Uhlíř again:

“From 1945 until 1990 our historians did not have the opportunity to comprehensively study the archives either at home or abroad. So the bits and pieces that we were aware of are only now being put together and the mosaic is being rebuilt with greater detail.”