A new report from the National Monitoring Centre for Drugs and Addiction has presented an alarming picture of half a million so-called problem gamblers in the Czech Republic with average debts of 1.2 million crowns. And, the report suggests, the problem is getting worse. Photo: Barbora Němcová The state organisation which monitors the impact of gambling recently presented its third annual report to the government. Among its findings are details on gambling addiction in the Czech Republic. Numbers for 2016 show that around 120,000 people in the country are addicted to gambling – a figure up 20,000 on the previous year. In total, Czechs spent almost 40 billion crowns gambling in slot machines, casinos, via scratch cards, lotteries and in online gaming last year.

I spoke with Viktor Mravčík, head of the National Monitoring Centre for Drugs and Addiction, and asked him if he was troubled by the findings.

“Yes, but in 2016 we actually observed a slight decrease in the prevalence of the population who had gambled in the last 12 months. But at the same time, we saw an increase in so-called problem gambling and gambling disorders. It is a public health issue, and many gamblers have health issues, as well as social issues, financial issues, and families are affected, too.” 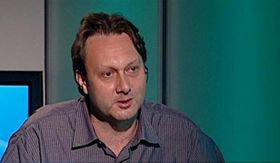 Viktor Mravčík, photo: Czech Television In 2015, the average debts of problem gamblers were half the amount found in the 2016 report. Mravčík noted that the Czech Republic is also among the countries with the highest number of slot-type gambling machines in Europe. However, as new legislation comes into effect this year designed to better regulate the industry, Mravčík believes that next year’s figures should begin to show a decrease in problem gambling among Czechs.

“The old law had been on the books since the 1990s, and I would say it was obsolete. This new legislation created order in the types of gambling, and in the licensing of all types of gambling – because according to the old laws there was no specific provision for the most popular games, namely video lottery terminals – the law also opened-up online gambling to all types of games; it opened the market up to the rest of the EU; and it introduced a number of preventative measures for the gambling industry to promote responsible gambling, and measures against the development of problem gambling, such as information which has to be provided to gamblers as they gamble, limits on bet amounts and so on...”

However, even as the reforms come into effect, Mravčík warned that the growth in popularity of online betting could lead to a shift in the nature of gambling addiction, and that the new legislation will certainly not be sufficient to completely address the high prevalence of problem gambling in the Czech Republic .