Whether it was in the show trials of the 1950s or reporting from the Middle East, an undercurrent of anti-Semitism was present in the communist propaganda apparatus in Czechoslovakia. At least that is what a new website aimed at teachers in secondary schools and just released by the Institute for the Study of Totalitarian Regimes reveals. 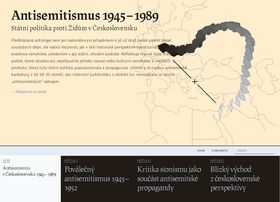 antisemitismus4589.dejepis21.cz Israel as the headquarters for Rothschild political power, kibbutzs as indoctrination centres and Jewish schools as centres of racist, militaristic teaching. These are just a few of the themes contained within videos and posters from the communist era now accessible via a website just launched by the Institute for the Study of Totalitarian Regimes, which oversees communist-era files and other materials.

Banking on a mix of primary sources, film materials and a detailed methodology on how to interact with them, the website serves as a tool for teachers looking to get their students more analytically engaged.

Historian Jaroslav Pinkas, one of the creators of the project, hopes that this will help break the myth that anti-Jewish feeling in Czechoslovakia disappeared after the fall of Nazi Germany.

“Many societies, including ours, believe that anti-Semitism is someone else’s problem. Through the tools offered on this website people can see that there was a relatively strong undercurrent of anti-Semitism which did influence Czech society. Our aim is not to add another of many themes into contemporary history curriculum at our schools, but rather raise awareness of the historical extent of the problem and make clear that it did not end with the Second World War.” 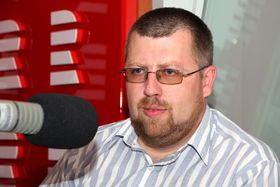 Jaroslav Pinkas, photo: Šárka Ševčíková / Czech Radio Three distinct types of anti-Jewish state propaganda in Czechoslovakia between 1945 and 1989 are identified in the project. First, an era of immediate post-war antisemitism, then a second period based around criticism of the Zionist movement during the normalisation era and, finally, the way in which Israel was depicted by communist media reporting from the Middle East.

The website was tested in 2017 and has been introduced into the general teaching curriculum for the first time at the beginning of the new school year. Meanwhile, Mr. Pinkas’s group is already busy creating another digital tool to improve students’ abilities in applying historical knowledge.

“Our largest upcoming project at the moment is a website called History lab, which is an online environment where students interact with primary sources, including caricatures, photographs, or texts.”

Education, popularization and research are the primary tasks of the Institute for the Study of Totalitarian Regimes, which was founded by a special government law in 2007.