Nový Prostor, a magazine sold by the homeless, is celebrating ten years of its existence. It was first published in 1999, under the name Patron, and since then it has become well-established in the big cities. Now a bi-monthly, Nový Prostor sells around 15,000 copies each and has around 160 sellers all over the Czech Republic. 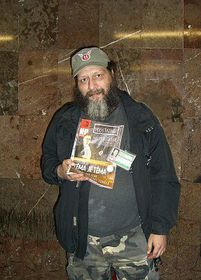 One of the Nový Prostor vendors Nový Prostor or “New Space” takes its know-how from the Big Issue, the British street paper sold by the homeless. Its sale is subject to strict rules. The vendors must wear badges, they are not allowed to drink and everyone has a sales place assigned to them. Jitka Junková has been selling Nový Prostor at Prague’s I.P. Pavlova metro station since February this year after loosing her job and ending up on the streets:

“I used to work in a printing house and I was kicked out without any severance pay. The owner still owes me three wages. I got 4.000 crowns a month on the dole, but the rent in my flat was 8.000. So I was kicked out of the flat and my first steps led to a boat for the homeless. There I met a woman who already worked as a seller, so I went to the office of Nový Prostor and started selling too.”

Mrs Junková buys the magazine from the publishers for 20 crowns and sells it for 40. She spends most of the day out in the street:

“The sale depends on the mood of people, on the weather, whether it is before or after payday and also on the day of the week: people tend to buy more before the weekend. Some day sells 20, some day 30 copies. It is not a lot but it is enough to get by, to wash my clothes and pay for a place to sleep.”

Dagmar Kocmánková, the co-founder of Nový Prostor, says homelessness continues to be a serious problem in the Czech Republic, with local authorities trying to push the homeless out of the city instead of addressing the problem:

“Homelessness has been a problem in the Czech Republic ever since the Velvet Revolution and the number of homeless grows every year. The first and so far only count in Prague took place in 2004 which registered some 3.500 homeless people. Today their number is likely to be much higher. The city’s shelters and the charity organisations have 1.500 beds altogether, so it’s a serious problem.”

Over the past ten years, the sale of Nový Prostor has had its ups and downs, but Dagmar Kocmánková says the most important thing is that Czechs have come to accept it:

“In one way I think we are successful because we have become part of life and we also have some success stories: people who were homeless now have work and proper accommodation. But we would like to be viewed as a project that helps people in need, not just homeless people. Not everyone who is selling the magazine is homeless. There are people who are still living in their flats, such as pensioners who are not able to cover all their expenses from their retirement pay. So this is what we want to change.”