An international conference on marriage equality will take place at the Czech Senate on Thursday, followed by a demonstration in support of the issue nearby. Organisers We Are Fair! are hoping those events will focus fresh attention on a bill, submitted well over a year ago, that would make the Czech Republic the first ex-Eastern Bloc state to permit same-sex marriage. I discussed the reasons the legislation has yet to make it through the first reading with Adéla Horáková, a lawyer with We Are Fair! 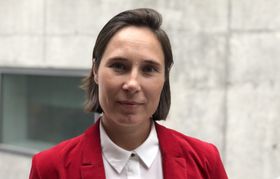 Adéla Horáková, photo: Ian Willoughby “I think there is a mix of reasons.

“One of them is simply the procedural rules of our Parliament.

“It is quite easy – and that is not the case only with this bill, it needs to be said – to obstruct a law, if you want to, to prolong the debate as long as you want to, so that the vote is never taken.

“The second reason, I think, is the lack of political will to give this bill an importance which it deserves.

“So we have people who are in favour, many MPs – and I believe enough of them to make this go to the second round [of voting] – are in favour of the bill.

“But there is not this strong sense of ‘OK, let’s get this done – this move this forward’, this sort of strong leadership and a decisiveness to allow this to be voted on.”

Who submitted the bill and who are the politicians who are in favour? I presume the ones who are against are, for example, the Christian Democrats, perhaps the Communists?

“The two parties which are I would say equalling opposing the bill, and are very similar in this respect, are the Christian Democrats and Freedom and Direct Democracy.

“Then there are parties who are as such, as a whole party, in favour – and those are the Pirates.

“And I think we are close to having the same situation and party line support with the Mayors and Independents.

“The rest of the parties have a free vote.

Photo: monteiroleo, Pixabay / CC0 “So who submitted the bill? MPs from many different parties: from ANO, from the Social Democrats, from the Pirates, from the Mayors and Independents, from TOP 09.

“So it was across the board support, I would say.

“I think it shows very clearly what we’re saying, which is that marriage equality is not a political question – it is a human question.

“He [Nick Herbert] is an MP in the British Parliament for the Conservative Party.

“He was very much in favour the marriage equality bill in Britain – he was one of the promoters – and he’s a Conservative.”

You refer to the British MP who’s coming on Thursday. Tell us about the events that you have planned for that day.

“We’re very excited about it.

“I think this is a one of a kind day that has not ever happened here, and I don’t think it will happen again afterwards for a very long time.

“Several things are planned and one of them is an international conference in the Senate, from 2 o’clock in the afternoon.

“We’re very happy that this conference is organised under the auspices of the Senate club of ANO, and Senator [Miroslav] Adámek in particular.

“And in the evening, from 6:30 at Malostranské náměstí, there is a happening/demonstration for the general public.

“Everybody who wants to come and support the idea of marriage equality can come at 6:30 to Malostranské náměstí. 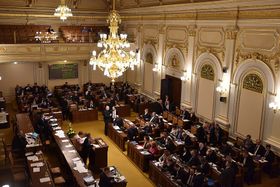 What’s your sense of how much the Czech public is behind this campaign for marriage equality? I was reading that the majority of Czechs, according to opinion polls, are not against at least same-sex marriage.

“On average, from three different polls that were run independently of each other, it shows support around 61 percent, which is high.

“I don’t know if you can think of another social issue that has such high support.

“It shows that Czech people are in general people who don’t let themselves be manipulated. They have their own mind.

“They are also well-wishers for others – sort of live and let live, I would describe this attitude.

“And that’s exactly what we’re asking for.

“This is a change that will hurt no-one, but it will help many.

“There are many countries in which when the bill was adopted the support was even lower than that.”

All these months after the bill was first submitted, what are you hoping will happen now?

“So the next move we want to be done is the vote in Parliament.

“It’s one of many steps, but this is the one we need now.

“We would ask all our MPs to take all the actions they can to make sure the bill is voted on.

“Not to push it underneath the desk, not to hide it, but to give it the attention that it needs and to vote on it in the October session of Parliament.

Photo: Nick Karvounis / Unsplash “Because otherwise we will run out of time and, as for so many years beforehand, the bill might just slip away and never be voted on.

“And I think that would be the worst case scenario.”

I don’t know if you’re a betting woman. Would you bet on same-sex marriage being approved, at least say during the term of the current government?

“I would certainly bet. And I would hope to win."