Pardubice – buoyed by Hašek – one win from taking championship

The Czech hockey club Pardubice are one step away from winning the playoff final in the Czech hockey league’s Extraliga. On Wednesday, the team, boasting legendary goalie Dominik Hašek in net, trounced opponents Vítkovice 5:2, to take a stranglehold on the best-of-seven series. One more win and they’ll sweep their opponents, winning the title for the first time since 2005. If they do, it will be Hašek’s first hometown title in 21 years, to add to earlier successes such as Olympic Gold and two Stanley Cup rings. “He has definitely been a factor and Vítkovice has been having problems to create chances. And when they do have a chance they come up against Dominik Hašek. He has played really well and the numbers show it, allowing only three goals in three games, which is great, and has shown that he is still capable of great performances even at his age.”

He is 45 and it may come as a surprise to some abroad that he is still playing and doing well in the Czech league...

“It’s amazing how he can prepare himself for important games. He wasn’t that terrific during the regular season but has played very well during the playoffs and grown in confidence with every game. Pardubice have won 11 games in a row, which is a record in the playoffs.” 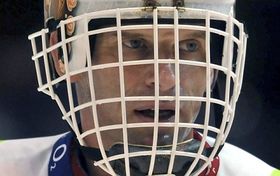 Dominik Hašek, photo: CTK “I don’t think so, I don’t think he has a big chance. The team coach Vladimír Růžička has already said that his No. 1 goalie is Tomáš Vokoun and I don’t think he’d mix these two goalies as No. 1 and 2. I’m not even sure he’d entertain the idea of taking Hašek. So his only chance, it appears, is if Vokoun couldn’t go due to injury or something similar. Then Růžička would have to go for an experienced goalie to replace Vokoun. That could be Hašek’s only real opportunity, and I don’t think it is one the coach is counting on in his team plans.”

Pardubice will have a chance to try and wrap up their series against Vítkovice later on Thursday. 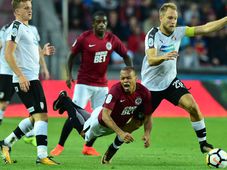