Markéta Pekarová Adamová has just been elected chairwoman of the opposition TOP 09. The sole female leader of a party in Parliament is herself just 35 and is reaching out to younger voters. But her main task will surely be ensuring TOP 09 makes it back into the lower house. 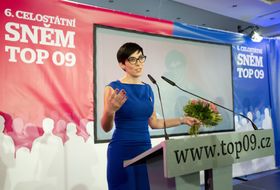 Markéta Pekarová Adamová, photo: ČTK/Kateřina Šulová Markéta Pekarová Adamová was elected chairwoman of TOP 09 with 54 percent of the vote at a party congress in Prague on Sunday. She becomes only the second female leader of a party in the Czech Parliament after Hana Marvanová, who headed the Freedom Union in the early 2000s.

Pekarová Adamová finished ahead of senator Tomáš Czernin, who was voted first deputy chairman of the conservative grouping.

The freshly elected party chief, who is herself just 35, told delegates she hoped TOP 09 could tap into the spirit of recent celebrations in Prague of the 30th anniversary of the fall of communism.

“There was a positive dimension on Národní. Among those people there were thousands of young people, born after 1989. I’m very glad that they share the values of the Velvet Revolution. And those, after all, are the values of TOP 09. I would like to invite them to join our party. Join us – you are welcome.”

Pekarová Adamová supports the Czech Republic’s general orientation toward the West and has made adopting the common European currency one of her key policies.

“It’s not just an economic project – it’s above all a political project. It would be good if people were aware of all the pros and cons, and we have a lot of work to do in that regard. Support for the euro is growing slightly and was at a third of the population in a recent poll. And that third is not being heard, because we politicians aren’t accenting this issue enough.”

The new TOP 09 chief takes over from Jiří Pospíšil, who was at the helm for two years and says he wishes to concentrate on his work as an MEP. 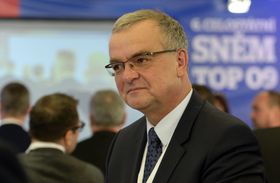 Miroslav Kalousek, photo: ČTK/Kateřina Šulová However, Kalousek says the party’s leader and number two can now achieve a lot together.

“I won’t deny that I had envisaged the opposite outcome. But I believe even like this it will be very good. It will be a competent and elegant tandem that will make the party more visible.”

Ms. Pekarová Adamová takes over a TOP 09 that are not the force they once were.

While they garnered 41 seats in 2010, they hold only seven in the current Chamber of Deputies. Indeed they only scraped past the 5 percent threshold last time out.

Markéta Pekarová Adamová’s main task will surely be ensuring TOP 09 do at least as well in the next general elections and halt a perception they are sliding toward irrelevancy.