Czech tennis star Petra Kvitová has made an emotional return to professional tennis, five months after sustaining a potentially career-ending hand injury, with a decisive first round victory in the French Open. 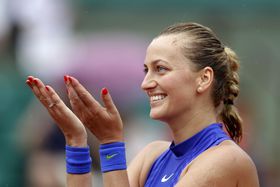 Petra Kvitová, photo: CTK “I’m really glad that I made the decision to play here. It was a tough decision. I’m glad that we got a green light from the doctor that I could play and my hand was OK...and I am glad that I didn’t feel it and that I played a good match!”

That was Petra Kvitová talking to the press after her winning comeback match on Sunday at the French Open. The last few years have not been easy for the 27-year-old former number 2 ranked tennis player. Illnesses off court as well as something of a slump on-court led to Kvitová struggling to match earlier career successes, such as her 2011 and 2014 wins at the Wimbledon tennis tournament. Then, on 20 December, 2016, things got even worse as she fended off a knife-wielding robber in her Prostějov apartment. To this day, the male attacker – an opportunist robber who reportedly posed as a utilities man – has never been apprehended. Kvitová, a left-handed player, suffered serious injuries to her playing hand, with tendons cut and nerves damaged.

The tennis star said she was lucky to be alive. It reportedly took four hours of surgery to repair the damage inflicted. Doctors were sceptical she would be able to play again. Nonetheless, Kvitová began a course of therapy designed to get her back into tennis within six months. She made remarkable progress, and was deemed fit enough to make her comeback a month early, at the French Open, which began in Paris on Sunday.

Kvitová was seeded 15 out of 32 players taking part in the women’s singles tournament; her five-month absence from the court has also seen her world ranking slip down from 11 to 16. But in a barnstorming 6-3, 6-2 victory against the 85th-ranked US player Julia Boserup, Kvitová convincingly demonstrated that she had regained not just her physical fitness but also her confidence. The match lasted just 74 minutes. Kvitová later said that she had an understanding with her coach that if she felt any pain in her hand, she would withdraw from the match.

There were a few bumpy moments, such as an early double fault; and a number of unforced errors prevented the player from going up 4-0 in the opening set. But Kvitová managed to keep such nerves largely at bay, delivering a decisive victory against Boserup. After the winning point, Kvitová dropped her racket and became visibly emotional as the audience cheered her stunning comeback. 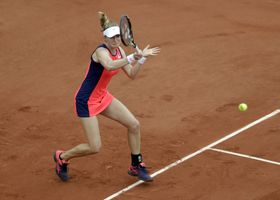 “Welcome back @Petra_Kvitova - fantastic to have you back playing - and congratulations for winning today- DO TOHO!:)”

Kvitová becomes the first player to reach the second round of this year’s French Open. Speaking afterward, she described the match as a double victory – one the match itself, and the other the very fact that she had returned to professional tennis. Kvitová also acknowledged that she wasn’t yet feeling 100 percent, and during the match sometimes struggled to firmly hold the racket in her hand. But, she added, “I think if I practice more, my hand will improve and I will be better and better...”