There were tens of thousands of telephone booths in the Czech Republic at the turn of the millennium. Today there are only 1,500, with more and more being removed by the day. While few seem to be shedding tears of nostalgia, some municipalities have found new uses for them. He set up a new company called the Prague Telephone Business and placed the first, public pay-phone in the capital’s Old Town district.

The first proper phone booth would only appear in 1911, but their golden-era would indeed come, as the young Palacký predicted. By 2001, their number in the Czech Republic had reached 30,000.

However, as the noughties progressed, more and more Czechs could afford a new, revolutionary invention – the mobile phone.

Replaced by their more compact and mobile rival, phone booths today only get used approximately once a month and have instead become mainly an attraction for vandals. 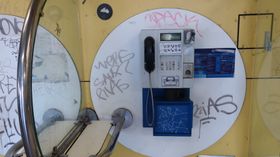 Photo: Lenka Žižková In view of this, operator O2, which administers the service in the country, is removing thousands off the streets and many a town does not feature a single booth nowadays.

One of them is the town of Netvořice in Central Bohemia, where only a square in the pavement marks where a phone booth once stood.

Local mayor Monika Šlehobrová says was not sorry when the removal team arrived.

“Since they were not being used by our citizens, no one complained when they removed it. I certainly do not think it was any loss.”

The story is much the same in the nearby village of Chářovice, mayor Zuzana Krajánková told Czech Radio, although a phoneless booth still stands on the street.

“As the mayor, I was asked if we want to keep our street phone. I know our citizens do not use it, so I agreed that it could go.

“I do remember the last time I used it back in 1997, when I called in to Czech Radio to ask for a song for my husband’s birthday. He listened to it at work.”

Not all of the authorities want to see the boxes removed completely.

A recent study, commissioned by the municipality of Prague 1, showed that phone booths could be used for a variety of purposes, ranging from the hanging of posters on the district’s local events, book sharing deposit points and bicycle stands to phone recharging stations. As a result, Prague 1 has decided to hold on to the 66 boxes that can still be found on its streets.

Despite the changes, some 1,150 phone booths are set to remain in use, as they are located at key points across the country and their presence is ensured by law.