Prague councillors on Tuesday approved a controversial plan to create a special camp for the city’s homeless somewhere in the suburbs; a place where they would be given food and shelter, while remaining conveniently out of sight. Councillors argue that this will bring relief to both the general public and the homeless. However, human rights activists and non-profit groups have raised an outcry against what they see as a dangerous policy of segregation.

The city of Prague is calling it “an integrated assistance centre” for the homeless: a place on the outskirts of town which would provide shelter, medical assistance and two hot meals a day for homeless people who have little chance of ever returning to a normal life and who get turned away from other help centres because they are uncooperative, drunk or on drugs. Its initiator Jiří Janeček says that the centre should be a last resort for those who have no place to go.

“I have no intention of creating a centre for the entire homeless community. Prague has over 3,500 homeless people. Of those around 150 are in such a pitiful state and so uncooperative that they get turned away from shelters. Then they either sleep on the street or end up in a drunk tank. In the worst case they freeze to death. As I see it, they would be better off in a centre where they can get food, shelter and medical care. So we want to set up the centre, give it a trial run and see how it goes.” Photo: CTK The centre would be made up of tents and pre-fabricated cabins, food would be distributed twice a day, and there would be a doctor to provide medical assistance. A security agency would be responsible for maintaining order and although homeless people would not be physically forced to go there, the city police and social workers in the city centre would put pressure on them to do so: by constant ID checks and orders for them to move elsewhere.

Human rights activists and NGOs working with the homeless are aghast – calling it a crude attempt at social engineering, which does not treat the homeless as human beings. Pavla Vopeláková from the Czech Salvation Army says the approach is all wrong. 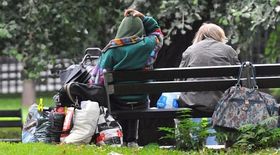 Photo: CTK “I know Mr. Janecek is speaking about those that are uncooperative, but I do not think that they will be cooperative in this situation anyway. What we have to do is build up a relationship with these people and get them to trust us. They have to accept us as people who really want to help them and not as someone who wants to send them out of sight, to get rid of the problem. We have to start offering them aid where they are and step by step move them to a safer environment. I do not necessarily mean shelters right away because it is true that there is a problem with alcohol, but I am speaking about low-threshold day centers where they can be in a safe environment. We have to get the relationship with them right and them we can move them on.”

The vast majority of European metropolises provide aid for the homeless in the city centre. However, Pavla Vopelákova says the Czech project is not entirely new: something similar was attempted in Paris a few years ago, and proved a failure. 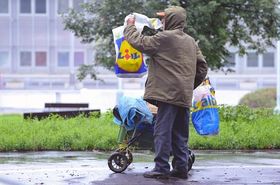 Photo: CTK “It was a very similar set up: once a week there was a special train taking homeless people from the centre of Paris to the suburbs. But it failed because these people would spend a night or two there and then return to the city centre because that’s where their friends were, that’s where they could beg for money or find food. It is their natural environment – they will always return to the capital because it is the place where they are used to being, it is anonymous and that is where it is easiest for them to live.”

Prague city hall says that the centre for the homeless could be set up and ready to operate within six months’ time, most likely in the suburb of Malešice. However there are many ready to fight it. The opposition Social Democrats say that if they win enough seats on the council in elections this autumn Jiří Janeček’s plan will remain on paper, where it belongs.