Planning permission has been granted for a massive new office and commercial development at Prague’s Národní Třida metro station, which promises to change the face of this busy central intersection. The architects behind the plan promise to revitalize a location which has in recent years become associated with pickpockets and the homeless – but their plans have far from won universal approval. It looks likely that thousands of angry commuters whose journeys would be disrupted by the project will appeal against the construction.

You might know Prague’s Národní Třida for its towering and not-very-pretty Tesco building, and its metro station – which is the busiest in all the capital. Some 40,000 passengers a day pass through this artery – but perhaps not for that much longer. Planning permission has just been granted for a mammoth new office complex to be built above the station, which could see the metro closed for over one year. This has sparked the ire of a number of Prague commuters, who have signed a petition against the project – and who look set to appeal the planning approval. The petition has proved popular, already garnering over 5,000 signatures, and even Prague Mayor Pavel Bém has spoken out against the metro closure.

The architects behind the scheme – Cigler and Marani, who are also redeveloping Prague’s Wenceslas Square – say that they hope to transform this city centre location from its current neglected state into a ‘multifunctional’ shopping and office complex, with parking and a few luxury apartments. Many Prague inhabitants will be pleased to see the space around Národní Třida given a facelift – at the moment it is a favourite haunt for Prague’s homeless, and is one of the capital’s pickpocketing hotspots. Cigler and Marani want to turn the mostly concrete park beside the metro station into a series of thoroughfares with shops and fountains.

The space may not be very pretty at the moment, but it is one of an increasingly small number of non built-up areas in Prague city centre. While many agree that something needs to be done to the shabby metro station and its surrounds, an increasing amount of pressure is being placed upon the municipal authorities to preserve what little green space is left elsewhere in the city centre. With several other major downtown redevelopment projects planned for later this autumn, this looks set to be only the start of the discussion. 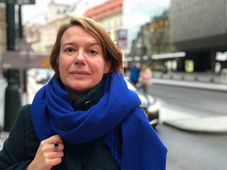 Czechoslovakia’s Velvet Revolution was sparked by a student demonstration on November 17, 1989 that was brutally quelled by riot police.…