A plaque was unveiled in Prague on Thursday to a fascinating figure of modern Czech history, General Alois Eliáš. General Eliáš, who had fought in the Czechoslovak Legions in the first world war, was appointed prime minister during the occupation of Bohemia and Moravia in the second. While in that post he worked with the resistance – and became the only head of government of an occupied state to be executed by the Nazis.

On Thursday morning, a day after the 120th anniversary of his birth, a plaque was unveiled to General Alois Eliáš at his former family villa in the Prague suburb of Hanspaulka.

The keynote speaker, Czech lower house chairwoman Miroslava Němcová, said the general had been killed twice: once, literally, by the Nazis, and once, figuratively, by the Communists, who for decades portrayed him as a collaborator.

His story is certainly intriguing. In World War I Eliáš had been an important figure in the Czechoslovak Legions, whose fighting alongside the Allies paved the way for the foundation of Czechoslovakia.

The general, who was a popular figure in the inter-war period, reportedly thought long and hard about accepting the post of prime minister after the Nazis invaded Bohemia and Moravia. But he took the job rather than see it filled by a Czech fascist or collaborator.

The director of the Czech Military History Institute, Aleš Knížek, offers this assessment of Eliáš.

“He was one of the main establishment figures in the army during the inter-war First Republic. He was the kind of man who was able to always stand on the right side in situations which were critical for our nation. He took a great weight onto his shoulders – the prime minister’s post in the protectorate government – even though he knew things would never end well for him, and he wouldn’t live many more years.”

General Alois Eliáš actually lived for over three years after being appointed prime minister in April 1939. While in office he had been in active contact with both the anti-Nazi resistance in Czechoslovakia and the country’s government in exile in London, and in September 1941 he was arrested by the Gestapo. He was given the death penalty, though the sentence wasn’t carried out until the following June, as part of reprisals for the assassination of the Nazi governor, Reinhard Heydrich.

But did General Eliáš make a huge mistake in accepting the post in the first place? And is there any sense in which he could be compared to the Norwegian WWII leader Quisling, whose name has literally become a synonym for collaborator? Historian Aleš Knížek thinks not. Aleš Knížek, photo: www.vlada.cz “I wouldn’t like to make that comparison about a person who did everything for his country, and lived in the specific conditions of Czechoslovakia and the very, very complicated protectorate of Bohemia and Moravia. For me General Alois Eliáš remains a rare figure in our history. He has no parallel in the anti-Nazi resistance, partly for the very reason that he was executed as prime minister.”

General Eliáš’s reputation was fully restored after the fall of communism, and in 2006 his remains were re-interred at the Czech Republic’s main military memorial in Prague. 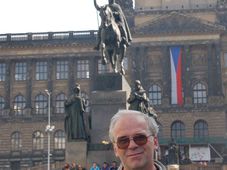 Mariusz Surosz: Czechs and Poles – “Nobody Knows Anything”

One of the curious things about Central Europe is how little people from the various countries of the region know about each other.…

Mariusz Surosz: Czechs and Poles – “Nobody Knows Anything”

One of the curious things about Central Europe is how little people from the various countries of the region know about each other.… 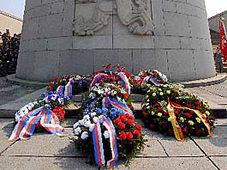 61 years on - the Czech Republic commemorates the end of WWII

On Monday the Czech Republic commemorated the 61st anniversary of the end of the Second World War. Over the weekend, ceremonies were…