After the sudden, if not totally surprising, announcement that long time Social Democrat stalwart Jan Mládek, would be dismissed as minister for industry and trade at the start of the week, Prime Minister Bohuslav Sobotka was expected to follow through by announcing a replacement on Thursday night. Those expectations were confounded. Bohuslav Sobotka, photo: CTK While the meeting with president Miloš Zeman drew a line under Mládek’s ministerial career from the end of February, it did not stop speculation about the successor. In fact, Sobotka pulled something of a surprise out of his hat by announcing that he would temporarily fill the post himself for a couple of weeks at least and the process of finding a successor would continue.

“I expect this appointment to be temporary. I have no ambition to head the Ministry of Industry and Trade until the elections to the lower house of parliament. I expect that following the Social Democratic party congress, I should be able to propose to the president a candidate who will join the government and lead the ministry until the elections.”

The Social Democrat Party congress is scheduled for March 10. Sobotka’s main task there will be to win support from an out of sorts party to lead it into elections to the lower house of parliament due in October. 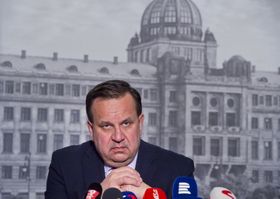 Jan Mládek, photo: CTK The Social Democrats are still scarred after losing support and dominance of regional assemblies at elections in October last year. And they consistently trail the ANO party of finance minister Andrej Babiš in nearly all polls for the last two years. Some recent polls see ANO winning a third of electoral support with the Social Democrats down below 20 percent. In spite of murmerings of discontent and outright opposition in one region, Sobotka should be acclaimed as election leader.

Sobotka also expects his short-lived term as industry minister to shake-up of costly mobile data charges in the Czech Republic, the cause of the final rift with Jan Mládek that prompted his dismissal. PM Sobotka again:

“I expect the Ministry of Industry and Trade to push through to a conclusion very quickly changes affecting the market for mobile phone operators, legislative changes which should improve the rights of consumers and reduce mobile data costs. I will personally oversee these changes in the next days and weeks.” 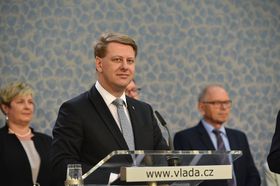 Tomáš Prouza, photo: archive of Czech Government Going into Thursday night’s meeting between prime minister and president, the name of State Secretary of European Affairs Tomáš Prouza had been bandied around as the most likely new minister. He already has a slice of the industry dossier as coordinator of the government’s digital development agenda.

But the president’s spokesman suggested that Prouza might not be a welcome choice because he is allegedly close to non-profit organisations which frequently target Miloš Zeman for criticism. Prouza, as well as other possible candidates, might also have reservations about taking up a still highly charged industry ministry dossier for just seven months before elections could see them ejected.

As well as the question of mobile data, the ministry should be piloting the construction of high speed internet across the country, nominating a new board and boss at the energy regulator, attempting to plot the future of struggling coal mining company OKD and help keep one of the country’s biggest engineering companies, Vítkovice, afloat.