Czech Prime Minister Bohuslav Sobotka has affirmed his county’s support for the EU integration project as European leaders met in Rome over the weekend marking the 60th anniversary of the Treaty of Rome. 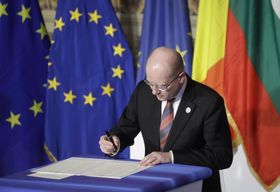 Bohuslav Sobotka, photo: CTK Just days ahead of UK Prime Minister Theresa May formally beginning the Brexit process, the two-day meeting in Rome – held on Friday and Saturday – was designed to rekindle a sense of unity among the remaining 27 member states. Leaders symbolically signed a carefully worded declaration to that effect at the very location where the Treaty of Rome kicked-off the process of the post-war integration of Europe back in 1957.

The formal Czech position ahead of the talks was simple: no to the creation of a multi-speed Europe, enabling some states to move ahead in terms of integration while others lag behind; and yes to increased defence cooperation.

Speaking at a press conference after the summit, Sobotka mirrored the optimistic tone underscoring the event:

“This was a very important historic event that has enabled us to once again reflect on those things that unite us in Europe. Common roots, common values, and a common history, which in the past often placed us against each other.”

Sobotka said he was glad that unlike in 1957 those countries which had found themselves on the “wrong” side of the Iron Curtain such as Slovakia, Poland and Hungary, could also be present this time in Rome. Today, the countries form the Visegrad Group, or V4 bloc, which has become something of a thorn in the side of the EU integration project, especially on issues such as immigration and border security. In the run-up to the summit, EU countries haggled over the final text, which ultimately included a compromise statement of moving at “different paces” while “moving in the same direction”. Such a compromise would appear to open the door to a “multi-speed Europe”, in spite of formal Czech opposition to such an idea.

Asked about the Czech Republic’s role in the EU, the Prime Minister asserted the country’s right to make its own decisions: European leaders at the summit in Rome, photo: CTK “The Czech Republic should always make decisions on the basis of its own national interests, and the interests of its own citizens. And across individual forums for increased EU cooperation, we should always decide on whether these bring advantages to the country or not, or whether the benefits exceed the costs.”

Sobotka also advocated the country’s support for EU common defence, alongside fellow proponents France and Germany, while also backing an option for an EU country to not support a particular integration measure if it so chooses.

“I believe that as far as further integration is concerned, the EU should achieve consensus in its decision-making through the normal political process of dialogue between individual EU member states. The alternative is a path for increased cooperation (between certain members), but that should be one which does not preclude other members from choosing to also partake in it at a later point.”