Wednesday afternoon saw roughly one hundred right-wing extremists protest in front of the Office of the Government, in reaction to a carefully-planned crackdown by police earlier in the day. Officers moved in in the early hours of Wednesday morning to arrest almost 30 individuals across the country suspected of ties to extremist and neo-Nazi groups.

Wednesday morning the police move in at addresses including Prague, Kralupy nad Vltavou, České Budějovice, Zlín, a crackdown against individuals suspected of ties to extremist and neo-Nazi movements. The second such wave in four months saw almost 30 people arrested, among them, a politician for the extreme right-wing Workers’ Party, thought to have ties to the neo-Nazi movement known as Národní odpor. Another picked up by the police: the bassist for a known neo-Nazi rock band called Impérium. 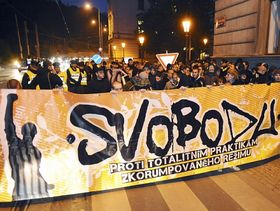 Photo: CTK In the course of the crackdown, police confiscated books, computers, and other items – allegedly looking for evidence related to neo-Nazi concerts and more. Interior Minister Martin Pecina confirmed for Czech TV that such steps would continue as long as there was reason to suspect criminal activity. But representatives of the extremist Workers’ Party cried “foul”, saying the arrests were an attempt by the government to strengthen its aim to see the party banned. The party’s Martin Vandas:

“It’s a last minute attempt to try and find some kind of evidence that would legitimise banning our political party.”

Not surprisingly, the police, aren’t commenting: tight-lipped even on the exact number of those taken into custody Wednesday. So far for this year, though, this much is clear: the police have largely stepped up crackdowns in apparent response to the alarming jump of neo-Nazi activities in the country in recent years - from demonstrations to illegal concerts. 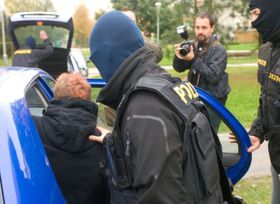 Photo: CTK Arguably, the most significant bust came by police back in August. After months of investigation and slow-going, officers arrested 12 (and later charged four suspects) for a brutal firebomb attack against a Romany family. That attack which took place in the east of the country, left three people injured: parents and their two-year-old daughter. In the incident, the toddler only narrowly escaped death and remains in treatment after having suffered burns to 80 percent of her body.