Police clamp down on neo-Nazi protesters around the country

A rise in political extremism in the Czech Republic has been at the centre of media attention in recent weeks, and the past weekend was no exception. In the wake of the biggest ever police operation against the country’s ultra-right groups, far-right radicals took to the streets in a number of towns and cities to protest against the arrest of ten neo-Nazis. 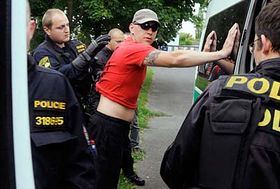 Photo: CTK Expecting a backlash from far-right supporters riot units were out in force in a number of towns where neo-Nazis are known to congregate. In Most, north of Prague, they dispersed an illegal protest march, detaining 14 people in the process. In Zlín they arrested several more as extremists clashed with anarchists. In Havlíčkův Brod, Mladá Boleslav and Jablonec nad Nisou it was the same story - protesters were detained for wearing Nazi symbols, for making the Hitler salute or shouting race-hate slogans. After months of turning a blind eye to these violations of the law, the police are cracking down on offenders with unexpected force. Interior Minister Martin Pecina told journalists over the weekend that he was determined to see the far-right Workers’ Party outlawed before the caretaker government’s short term in office ends. 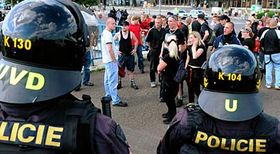 Photo: CTK “The proposal to have the Workers’ Party outlawed should be ready for approval by the end of August – and we expect the Supreme Administrative Court to get it by mid-September”.

The ten extremists arrested in Tuesday’s police raids have all been charged with promoting a movement aimed at suppressing rights and freedoms. If found guilty, they face up to eight years in prison. Those detained over the weekend could face similar charges. On taking office in May, Interim Prime Minister Jan Fischer said the fight against extremism would be one of his top priorities – and he is clearly standing by his word, even though it means that his family and that of Interior Minister Martin Pecina have been given police protection. The prime minister is believed to be a potential target not just because he ordered the crack-down on extremists, but because of his Jewish origin. Attending Saturday’s commemorative gathering in memory of the Lidice massacre by the Nazis, the prime minister said he was greatly disturbed by what is happening in society: 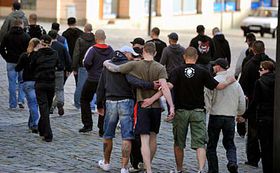 Photo: CTK “I hear strange voices of late, from unexpected quarters and I read disturbing things. You know this is how it all began [in Germany] and Lidice is a reminder of how it could end.”

Paradoxically it emerged right there that right-wing extremism is not the only problem. The commemorative ceremony attended by the country’s top officials was unexpectedly disrupted by left-wing extremists, who unfurled a banner with the image of the Marxist revolutionary Che Guevara and the flag of the recently outlawed Communist Youth Union. Unlike in the case of far-right activists, the police seemed uncertain what to do – and failed to take action against the intruders.

Amidst the rise in extremism one thing is positive – the need to deal with the problem has united politicians on this issue at least, and the country’s interim prime minister is showing that he is far from the wimp many believed him to be.