Police come under fire for giving alcohol-free beer to motorists

Drunk driving in the Czech Republic, like other countries, remains a serious problem, so when police announced a clampdown in the Czech capital this week, most probably expected them to apprehend a lot of motorists who were over the limit. But things haven’t quite worked out that way. The daily Lidové noviny has questioned the campaign, saying it’s more about free advertising for a major brewery than actually tackling the problem of drunk driving. Photo: CTK This weekend Czech police warned they would be clamping down on drunk drivers in Prague: from Monday to Thursday, conducting random checks until 11 in the evening. The aim: to uncover those who had been drinking behind the wheel. Now, newspaper Lidové noviny has questioned a crucial element of the unusual campaign: the police have been handing cans of alcohol-free Staropramen beer to motorists who successfully passed a breathalyser test. They say the move has been an attempt to promote the consumption of alcohol-free beer as a safe alternative. 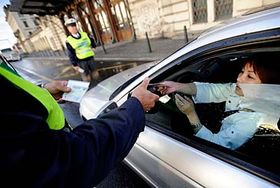 Photo: CTK But almost from the get-go the campaign has come under criticism: members of the opposition have called the handing out of free samples by officers “inappropriate” and they have charged it was “free advertising” for a private company. That has been denied by the police but criticism has been growing: former interior minister Frantíšek Bublan also waded into the fray, calling the whole idea “ridiculous”. He too questioned the campaign’s suitability.

For their part, the police aren’t budging yet. They stress the aim was a good one, to promote a positive message: for drivers to choose alcohol-free instead of alcohol and not to break the law and put lives at risk. In recent years, statistics have revealed a growing number of Czech consumers have begun reaching for alcohol-free beer – and regarding drivers the police clearly hope campaigns like this one will help.

Criminal offences down overall by 5 percent but rising in cyberspace, say police

Crime rates continue to sink in the Czech Republic, going down by 5 percent in 2018, and trust in the police is at a record high according…