Police in Prague say they’ve uncovered a huge money-laundering operation located in the city centre. According to the police anti-corruption unit, a firm based on Prague’s Narodni street had laundered hundreds of millions of dollars, apparently via a bureau de change and a complex of holiday apartments. 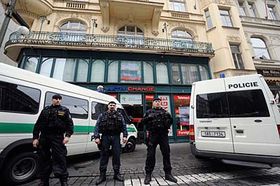 Photo: CTK Passers-by on the busy intersection of Prague’s Národní and Spálená streets witnessed an unusual start to the working week on Monday when police surrounded the large office building on the corner and sealed off the area. Eyewitnesses reported seeing a number of people being led away to waiting police vans, although the police are being tight-lipped about what or who they were looking for and indeed what they found.

A spokesman did confirm to the media, however, that the operation was part of an investigation into a huge money-laundering business. A spokesman for the police anti-corruption unit quoted in Lidové Noviny newspaper said at least 5.3 billion Czech crowns, which is just three hundred million U.S. dollars, had been laundered and taken out of the country. 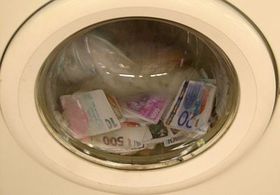 The building is home to a number of companies, including a popular bureau de change called Aktiv Change as well as a complex of holiday flats called Town Residence Apartments. According to Lidové Noviny, Aktiv Change is majority owned by an American citizen, with a British man and an Egyptian citizen also involved in the company.

A security expert contacted by the paper said bureaux de change were an ideal way of laundering large sums of money, because they keep far fewer details of transactions. But he also said he was sceptical that so much money could have been laundered in such a short time. So far police are not saying where they believe the money has come from, but the usual candidates are profits from prostitution, the sale of weapons and drugs. 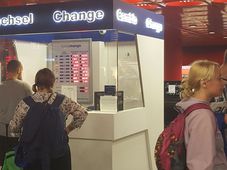 On Monday, a new amendment went into effect which seeks to tackle the shady tactics employed by many exchange offices in the Czech… 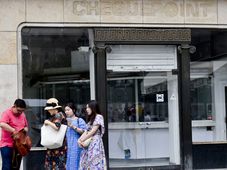 A downtown Prague exchange office that offered very low rates to visitors has just been shut down and ordered to pay a stiff fine.…