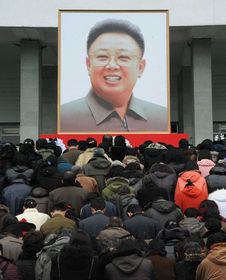 Kim Jong-Il, photo: CTK Thousands of people lined the streets of the North Korean capital Pyongyang on Wednesday to salute their late leader Kim Jong-Il who passed away earlier this month. It was not apparent from the footage whether the people, who appear to be deeply stricken with sorrow, truly mourned the death of the dictator under whose rule millions of North Koreans perished in labour camps, while scores of others died of hunger.

Among those who expressed grief over the demise of the “Dear Leader” was also the head of the Czech communist party, Vojtěch Filip. In his letter of condolence, Mr Filip said Kim Jong-Il “sacrificed himself for the well-being of the Korean people”, adding he hoped the ruling “Workers’ Party of Korea would overcome its grief and would again lead the Korean people’s struggle for the defence of socialism”.

Mr Filip’s condolences sparked controversy back home. Charges have been pressed against the Czech communist leader by a member of a Czech right-wing group while a spokeswoman for the Czech police said on Wednesday they would look into the matter to determine whether Mr Filip broke the law. According to the justice minister, Jiří Pospíšil, who called for the probe, the communist party chair might have breached the law by expressing sympathy for the North Korean regime.

“The Czech penal code also applies to endorsing movements that oppress human rights and freedoms. If someone sends such condolences endorsing the totalitarian regime in North Korea, it could be in breach of the law. But only the court can ultimately decide whether any activity is criminal or not.”

Vojtěch Filip has dismissed the claims. As the Czech Republic maintains standard diplomatic ties with North Korea, Mr Filip said, it was appropriate to express sympathy on the death of the country’s leader. For his part, member of the European Parliament for the Czech communist party Miloslav Ransdorf says the note of condolence was a mere formality.

“The position of the Czech police as well as that of Justice Minister Jiří Pospíšil is absurd. Such a note of condolence was also sent by the South Korean authorities that appreciated the role of Kim Jong-Il in the peace process on the Korean Peninsula; also, the UN observed a minute of silence in Kim Jong-Il’s honour. The note of condolence from Czech communist party leader Vojtěch Filip was only a formal letter not exceeding the usual practice in similar situations.” 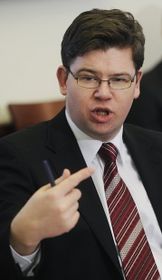 Jiří Pospíšil, photo: CTK However, the debate whether or not the leader of Czech communists should be prosecuted because of his condolences to the North Korean comrades is largely academic. As an MP, Vojtěch Filip enjoys parliamentary immunity which means it would be impossible to prosecute him on such political charges that could otherwise earn him up to three years in prison.