After last year’s methanol affair in the Czech Republic, the police redoubled efforts in uncovering bootleg liquor. A week ago, it was confirmed Tuesday, they found three secret sites and uncovered close to one million litres of undeclared alcohol. Earlier searches at different warehouses around the country missed the hidden chambers as they were sealed underground beneath metre-thick concrete. 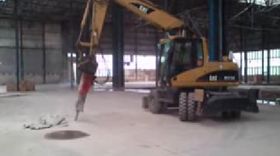 Photo: archive of the Czech anti-organised crime unit A video clip released by the country’s anti-organised crime unit shows it wasn’t easy, even after detection, to get to major stashes of alcohol stored underground. Required was help from fire fighters, customs officials, and others as well as the use of specialised geological tools and above all heavy machinery to pound through the concrete floor. In the video, a digger with a mounted hydraulic jackhammer breaks the ground; much later officials cut through with an abrasive saw.

The find yielded almost a million litres of alcohol worth up to 300 million crowns in unpaid taxes. The head of the crime unit, Robert Šlachta, reacted by saying the case would make into the history books: he called the amount of alcohol found enormous and the method of storage “sophisticated”. Finds came at three warehouse sites around the country, whose owners are already charged for roles in the methanol crisis that broke-out last September. Then, bootleg spirits mixed with deadly methanol made it onto the market, Countless people ended up in hospital and had to be treated, some of them suffering permanent health damage.

In all, some 40 people died. The case was the worst of its kind in the Czech Republic in recent memory, and the latest find, suggests that the sophistication of bootleggers goes even further than previously suspected.

Some of the facts, according to the police: 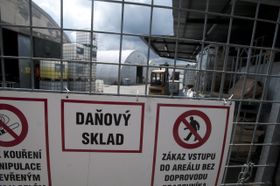 One of the warehouses where the underground tanks were found, photo: CTK Supply lines for filling the tanks underground stretched as far as 100 metres off-site – apparently making them easy to miss in earlier inspections; the holding tanks beneath the floor (28 x 2 x 2 metres in size) are estimated to have been put into use between eight and 10 years ago – with no other intention in mind than storing alcohol illegally. One of the sites is in northern Bohemia, the other two are in Moravia. So far laboratory tests have found the alcohol was untainted, but in two cases they uncovered samples of 94 and 96 percent alcohol. Further test results are awaited.

Investigators do not yet know – or have not yet confirmed – where the alcohol originated, nor have they pressed charges against anyone yet. The head of the police unit also did not say how many individuals are suspected in the case, nor is it known if there are similar facilities that remain to be found. Simply put, at this point, no one is saying how far down the rabbit hole goes, more information will be revealed in the coming days and weeks.