A gruesome find has made headlines in the Czech Republic: police have uncovered human remains in what appears to be a mass grave in a field near the village of Dobronín, in the Jihlava region. Fifteen Germans are said to have been brutally murdered there by the locals in the turbulent days after the end of World War II. The discovery is the first piece of evidence pertaining to this long-forgotten massacre and has once again re-opened a dark chapter of Czech-German history. 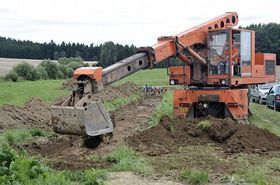 Photo: CTK On Monday, investigators found human bones in a field near the village of Dobronín. Quite possibly, the bones may be the remains of a group of fifteen Sudeten Germans, who are said to have been brutally murdered by Czech locals in late May 1945, a few weeks after the end of World War II.

There is little documentation of the gruesome event, safe for a German-language account by Fritz Hawelka, a Sudeten German who grew up in the area but, as most members of the German minority, was expelled after the end of the war. 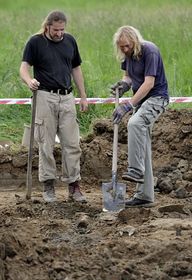 Photo: CTK Local journalist Miroslav Mareš came across the document and started collecting testimonies of victims’ sons and daughters. He then contacted regional authorities with the information, and police started interviewing witnesses last September. Mr Mareš spoke to me from the site of the investigation about its latest state.

“On Monday, the police started investigating the location and after about one or two hours, the first human remains were found. At this moment, we are documenting everything and digging deeper. According to the account given by Mr Hawelka, there should be between 11 to 15 victims buried at this site. So far, we have found the remains of two bodies and we cannot rule out that there will be more.” 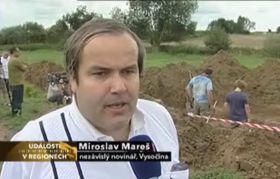 Miroslav Mareš, photo: CT24 Though similar incidents of ethnic cleansing and violent attacks against the German minority after the end of Word War II have been reported, descriptions of the massacre near Dobronín point to an exceptionally cruel mass murder. Czech locals are said to have killed the victims with shovels, spades and axes under the influence of alcohol, after first ordering them to dig their own grave. What has the reaction of today’s residents been to the emergence of possible evidence? That’s a question I put to Mr Mareš.

“I think that the locals have suffered a shock. Something that was talked about for a long time as being possibly true is currently being shown to be definitely true, and the truth is tough. This is a very quiet area, and this calm has now been shattered by the discovery of human remains.”

For a long time, the expulsion of Sudeten Germans was a taboo subject in the Czech Republic, but that is now slowly changing. Last year, police looked into a massacre that happened in the North Bohemian town of Postoloprty. Only this year, a memorial plaque for the victims was installed there; 65 years after the massacre took place. Is there still a lot of hesitation on the Czech side to own up to post-war crimes against Sudeten Germans? I asked historian Matěj Spurný. 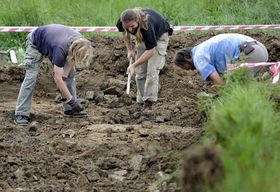 Photo: CTK “There is a lot of hesitation; on the other hand, we are much further than in the 1990s, for example. And in cases like Postoloprty, you can see it, that discussion is possible and that especially younger people want to know what happened and that the stereotypes are not as absolute as they used to be in the 90s.”

Police and archeologists will continue their work at the site until the end of the week. They will then send their finds to anthropologists, who will try to identify the victims with the help of DNA testing.