Political scene divided on proposed US radar base

Two weeks after the United States officially petitioned the Czech Republic for authorisation to operate a radar base in the country, the matter continues to make headlines. The domestic political scene is divided on the issue. While the governing Civic and Christian Democrats say they support the plan, the opposition Communists and Social Democrats are demanding a referendum on the issue.

Trokavec Some of the villages in the areas concerned are also calling for a vote on the matter. Trokavec is a tiny village in the Brdy Hills southwest of Prague where the planned radar base should be installed. The local councillors have decided to call a referendum on the matter in a month's time. Mayor Jan Neoral:

"Brdy is a lovely region and we don't want it destroyed by some radar base, just a kilometre away from our village. I don't know a single citizen who is in favour of the base. We have experience from previous decades with German and Soviet units in our area when whole villages were erased from the map and people displaced. Also in the event of an attack we would be a target."

Jan Neoral says that the mayors of surrounding villages are unanimously against the building of a military base in their vicinity. On Tuesday, Foreign Minister Karel Schwarzenberg is travelling to the area to meet the local representatives. 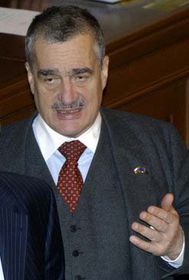 Karel Schwarzenberg, photo: CTK "We are hoping to be given some information at last. We don't like the fact that it is kind of half secret. We are still in the dark, no one knows what the facility will be for, what are the technical parameters, how it will be powered and so on."

An official decision on whether to allow the United States to build their radar base in central Bohemia should be made in the spring of next year, following a parliamentary vote. The opposition Social Democrats say they will vote against the base unless new information comes out of negotiations with the US or the base is included in NATO's collective defence system. On Monday, party chairman Jiri Paroubek discussed the matter with American Ambassador Richard Graber who said any negotiations would be held within the NATO context. 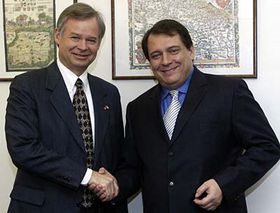 Richard Graber and Jiri Paroubek, photo: CTK "Certainly, it is not my position to tell the Social Democratic Party how they should proceed but I can tell you that I've had very good conversations with the chairman. I expect I will continue to have good discussions. [...] Obviously, from the United States perspective we hope such a facility moves forward and we believe it is in the best interest of this country and of Europe and of the United States. We've heard very clearly the desire for this to be a multilateral as opposed to bilateral undertaking. We believe that any facility that would be located here would be very complementary with a NATO facility."

Prime Minister and Civic Democrat chairman Mirek Topolanek dismisses the Social Democrats criticism, pointing out it was the previous Social Democrat dominated cabinets that launched and led secret talks with the United States on the possible construction of a US missile defence base in the Czech Republic.