Political scientist: Trump has widened the gap in perceptions as to what purpose NATO should serve

President Donald Trump’s meeting with NATO leaders in Brussels on Thursday was seen as an important indicator of how the change-of-guard at the White House may affect the future of the defence alliance and the security guarantees it has provided. I asked Vít Beneš from the Prague Institute of International Relations to assess the outcome of the meeting. 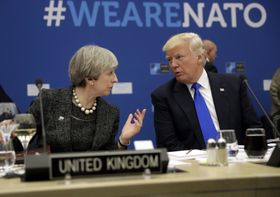 As regards his warning about paying up –was that a threat? Pay up or we won’t defend you? What is your interpretation? Or was it a statement for the home public?

“I do not think it was just for the home public. I really think it was some kind of veiled threat to his European allies and what I think is most disturbing is that he not only repeated the need to fulfil the commitment to give 2 percent of GDP towards defence, but he repeated some of the outrageous comments he has made about European allies owing money to the United States. So I really think that the results of the summit are worse than we expected –not only was there no clear commitment to Article 5, there was a repetition of this –I would say over-the-top – suggestion that European allies owe huge amounts of money to the United States.”

Does NATO see eye-to-eye on what the threats are and the priorities are today? Particularly as concerns Russia? NATO summit in Brussels, photo: CTK “I really don’t know what Trump thinks about Russia, whether he perceives it as a threat or whether he simply uses the hazy stand and strategic unpredictability with regard to Russia as a strategic asset in negotiations with European partners. What we clearly see is the gap in perceptions of what NATO is intended for. For the US president NATO is an alliance which should adjust its mission according to changes in the US perception of what represents a threat. He clearly wants NATO to be much more active in the fight against terrorism and I don’t think this is a step the European allies want to take. Especially in recent years we have seen that they want to stick more closely to the original raison détre of NATO which is territorial defence. Trump really treats NATO as some kind of alliance for pursuing out-of-area operations in fighting terrorism. So that is the clash of perceptions.”

Would you say then that the change-of-guard at the White House has weakened NATO?

“Definitely. I definitely think it has. Because NATO is not just about hardware, about material obligations, like the 2 percent of GDP, it is also about perceptions –whether NATO is seen, from within and from outside, as a coherent alliance. For example I really think that by being vague about Article 5 Trump essentially killed the nuclear deterrent that the US provides for Europe.”