Prague’s Václav Havel Airport on Monday launched new random controls of baggage checked in for the presence of trace elements of explosives. The move, in compliance with EU legislation, is to increase security to limit the possibility of explosive substances ever making it into planes’ cargo holds, as part of a terrorist attack. 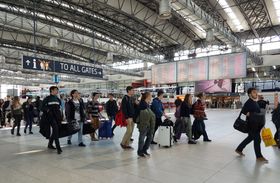 Photo: Ondřej Tomšů Prague’s international Václav Havel Airport has stepped up security to try to make it more difficult for explosives or an explosive device to be loaded into a plane’s cargo hold. In 2015, terrorists claimed to behind the disintegration of a Russian flight above the Sinai in Egypt; it is security experts’ worst nightmare that such scenarios be successfully realised. Checks at Prague’s international airport will be random and conducted in a special hall using an explosives materials detector. Marika Janoušková, the airport’s spokesperson, spoke to Radio Prague earlier:

“Along with hand baggage taken aboard, controls will also now focus on baggage checked in and destined for the cargo hold. The earlier checks were introduced in 2015 and the latest step is a logical extension of security measures. It is response to EU legislation as well as global threats and increases in technology. The technology we are relying on should it make it more difficult for explosives to be smuggled aboard.”

The process will require the baggage to be opened under strict safety conditions and the airport said most baggage relying on TSA-approved locks could be opened by personnel without causing any damage. Baggage inspected and found safe, will then be wrapped in protective foil and adhesive tape marked with the airport logo and the words “security checked”. Marika Janoušková again: Photo: Rob-Wei via Foter.com / CC BY-NC-SA “There shouldn’t be any problems with TSA locks. Some integrated locks which are part of the luggage don’t use TSA systems, in such cases there can be damage. But consider: we process some 20,000 pieces of luggage per day, twice that during the peak season, and several dozen pieces can be checked for traces of explosives per day. That and the fact that most travellers now use TSA standard locks, means that around 95 percent of baggage will not be damaged at all; the number of customers whose baggage is damaged should be fairly small.”

Aside from being wrapped in protective foil and tape, checked luggage will also include a page inside outlining the procedure. If property was damaged, the form will include a list of steps to take for reimbursement from the airline upon arrival.