On Tuesday, Prague city councillors officially approved plans for a new pavilion to be built just within Prague's Stromovka Park. An ultra-modern structure, the building has been planned for one reason: to house a famous series of paintings created by Czech art nouveau painter Alphonse Mucha, the Slav Epic. Completed in 1928, the series celebrates the mythical beginnings and legendary milestones in Slav history. Remarkably, until now the series has lacked a 'permanent' home. That will now change.

Back in 1928 the American weekly 'Time' noted its monumental completion: The Epic of Slavic History, or Slav Epic as it is known now. Twenty paintings so enormous, the weekly described Mucha as working on step-ladders to get them done. The series took the great Czech painter 18 years to complete, and when it was finished he donated it to the Czech capital. He even designed a building for the collection in Prague, which was never built. The series, though for a time displayed at Prague's famous Veletrzni Palace, was later moved to the small Moravian town of Moravsky Krumlov - where it can be seen to this day. The painter's daughter-in-law Geraldine Mucha:

"There are two Krumlovs in this country: one is Cesky Krumlov and that is a little gem. And, it has had millions of foreign money poured into it and it is a gem. Now, this is Moravsky Krumlov. Well, it's a nice village, but that's all it has: the Slav Epic. "

Soon, Moravsky Krumlov won't even have that. Now that Prague has given the green-light for its new Mucha pavilion, the work will eventually be moved to the site (designed apparently to look like an enormous box of matches on its side) found just within Prague's Stromovka Park.

But even there, not everyone is happy. Not everyone agrees that the building - or for that matter even the location - will be suitable. Architect and former Prague mayor Jan Kasl, for example, has said in public that he would have far preferred a classical-style building, within the city's historic centre. And, even Geraldine Mucha - who is one of the trustees of the Mucha Society - is less than taken by the idea of the pavilion in Stromovka Park:

"They want to use those canvases as a lure for foreign tourists into a rather dead end of Prague."

Even so, the project - estimated at 150 million crowns (the equivalent of 6.3 million US dollars) now appears will go ahead. The Mucha pavilion is to be built by 2010. 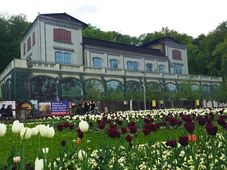 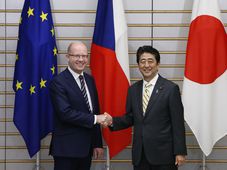