Long queues have been forming at Prague Castle recently after security was beefed up at the popular tourist site. Now it has been intensified further with the introduction of walk-through metal detectors. Officials say the measure protects visitors, though critics say less obtrusive approaches could be taken. 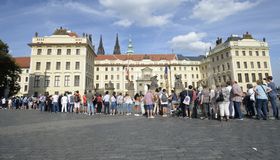 Photo: CTK Security was increased at Prague Castle at the start of this month. Soldiers started to patrol the complex, while police officers began checking visitors’ bags.

The controls were aimed at preventing weapons being brought into the castle and were sparked by fears of terrorism, officials said.

Especially in the first few days, long lines snaked around the square in front of the castle, Hradčanské náměstí.

Tour organisers complained about the waiting times and an industry leader even described the checks as “harassment” of tourists.

On Tuesday security at Prague Castle intensified further with the installation of two airport-style, walk-through metal detectors at a side entrance to the First Courtyard.

They are the only way into that part of Hradčany and queues immediately grew longer again.

Prague Castle is the residence of President Miloš Zeman and Jiří Ovčáček is his spokesperson. 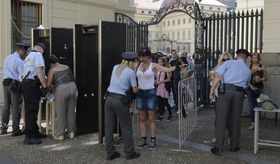 Photo: CTK “I emphasise, these measures have been introduced to protect visitors to Prague Castle from terrorist attacks. They are not connected with the security of the president… I would like to thank domestic visitors and foreign tourists for their understanding of these security measures, which are completely common in other countries.”

Mr. Ovčáček also said the security system was being tested at present and would be refined in time.

However temporary, some have questioned the latest move at Prague Castle. MP Roman Váňa is the head of the Chamber of Deputies’ Security Committee.

“I could imagine a slightly more sophisticated approach to security, like, for example, security cameras with face recognition. They could identify attackers on the basis of the international database of terrorists and such like. The controls would be constant and automatic – but without having to restrict tourists.”

Mr. Zeman’s defeated opponent in the last presidential election, Karel Schwarzenberg, has also weighed in on the issue, saying that Prague Castle is now more closed than it was under the last Communist president, Gustav Husák. 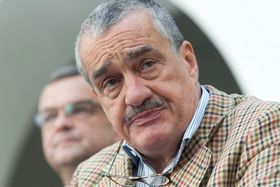 Karel Schwarzenberg, photo: Tomáš Adamec Mr. Schwarzenberg was chancellor to Václav Havel during his presidency and said he recalled the joy with which Mr. Havel had opened the castle up to the public in the 1990s.

The seat of kings has now been taken from Czechs and turned into a police headquarters, he said.

The latest security measures are not the last. Plans are in place to introduce similar metal detectors at the castle’s St. Vitus Cathedral.