The world’s most powerful military alliance, NATO, is in the middle of a far reaching and overdue rethink of its strategy. Former US Secretary of State Madeleine Albright is leading a group tasked with pointing the way. She and other members of the group were in the Czech capital Prague on Tuesday to collect input and give some pointers where the process is heading.

When the North Atlantic Treaty Alliance was created more than 60 years ago for the face off with the Soviet Union in Europe, one of its architects defined its role as “to keep the Russians out, the Germans down and the Americans in.” 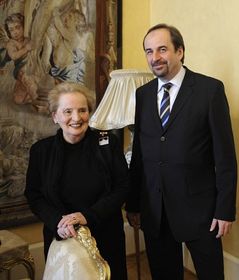 Madeleine Albright, Czech foreign minister Jan Kohout, photo: CTK That pithy definition has clearly been discarded with the end of the Cold War but NATO currently lacks a concept about where it is and where it is going. The strains between members are currently showing in its involvement in Afghanistan.

And the broad question is unanswered about how far it should stray from its core role of protecting members’ territory in an age of multiple terrorist threats, concerns about energy and other resources and fears about mass emigration caused by food shortages and climate change.

Former US Secretary of State Madeleine Albright leads a 12-strong expert group whose job is to draw up recommendations about how and where NATO should define its role in the 21st century. She summed up some of the challenges.

“The last strategic study was done in 1999, which was before the new countries were active members of NATO and before Nine-Eleven. And so I think that with an alliance that is 60 year old, some of us are slightly older, it requires a kind of rededication, a renewal of vows so to speak.” One of those “new” countries is the Czech Republic which experienced invasion by Soviet bloc armies when, in Moscow’s eyes, it stepped out of line in 1968. With relations with Russia one of the core issues for NATO’s strategic review, Prague along with other Central European countries are looking for pledges that NATO’s all for one and one for all defence concept, based on article five of its founding treaty, is not diluted.

Prague-born Madeleine Albright sought to calm fears on that count even though the shape of relations with Russia still appear far from clear.

“We have found that there is no question that an important concept is reassurance that Article Five is central to the NATO alliance and that at the same time it is very important to reset our relations with Russia.”

NATO’s strategic review also comes at a time of increasing public puzzlement about its mission in far off places like Afghanistan and eroding support in polls. That as, group deputy chairman of former boss of Royal Dutch Shell, Jeroen van der Veer, explained, is one issue that needs to be addressed.

“Public support for NATO, and especially in all the countries where NATO acts, is still high. For all the international institutions, NATO is still in a good place. But public support in most countries is not been as high as it has been.”

The group should report back to NATO Secretary General Anders Fogh Rasmussen by April with heads of state and government due to decide the new strategy by the end of the year.