A Czech-speaking customer buys a chain of homemade sausages in a trendy part of town. But, don't be fooled into thinking this is Prague: this is in fact Toronto, fashionable Queen Street West, where a delicatessen, known as the Prague Deli, has been preparing fine Czech foods since 1968. Run by three generations in the Kral family, the deli is nothing less than an "institution". Some would say: a "bite" of home away from home. It's where almost all Czech Torontonians go to stock up on schnitzel, cold-cuts, or even just desserts. 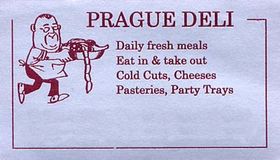 Especially in the early days the deli served as a hang-out spot for Czechs suffering from homesickness: most were unable to return to Czechoslovakia under the communist regime. The deli's Kveta and Walter Kral:

"In the old days they liked to just get together, the Czech community here. My father-in-law used to tell jokes: it was fun. Especially on Saturday, people used to come - not even to shop - but just to be together."

But, the Krals now admit their customers have changed somewhat over the years: 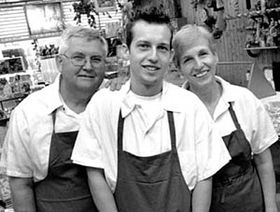 Walter (left), Tom and Kveta Kral "We started with mostly Czech community, as well as other Europeans: Poles, Ukrainians, but it has changed: we have mostly Canadian customers now."

"The ones who do come often do learn some Czech words here and there..."

"What the customer asks for we started to make: 'I'm going hunting, can you make some schnitzels?' Someone else would come and say 'Oh, I'd like some too' and so on. So we started with four a week and now we're doing 30 - 60 a day."

Schnitzels of course are not all you can get on the Prague Deli's menu which also includes classics like beef in mushroom sauce, beef in dill, and szegedin goulash. Among those to try the deli's ware in the past were well-known visitors from the old country: actors, actresses, singers, and more.

"Jirina Bohdalova was one, and Matuska, Jan Triska, and Eva Urbanova..." 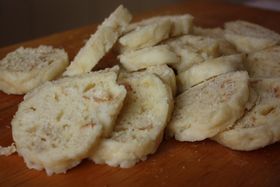 "Once the hockey team came and that was fun. We don't have too much space here. They were without Czech food - dumplings - for four days and they were so happy they could get them here!"

But, the quality of the European-style menu has not always been appreciated by everyone: the Kral's own daughter, Helen, admits that as a little girl she had little taste for European food.

"I used to go to school with these gourmet ham and cheese Kaiser-roll sandwiches but what I wanted was peanut-butter and jam on white bread! But all my friends who would come after school still remember our schnitzel with potato salad or our dumplings."

Today, Helen, who now works in her family's store, enjoys the Czech menu and she's far from alone. A few visits make clear that business is booming and that the Kral's home-made sausages were one of items especially in demand. As the Czechs say "Dobrou chut" - "Enjoy your meal." 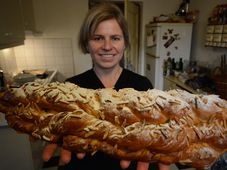 Christmas Eve is the most important festive day of the holiday according to Czech tradition. Although known as the “generous day” –…