With the 50th anniversary of the Soviet-led invasion of Czechoslovakia fast approaching, an exhibition just launched at Prague’s Old Town Hall brings together almost 200 photographs documenting that time. Most belong in private archives and a number are being shown in public for the first time ever. 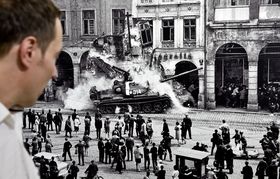 Those dramatic and extremely traumatic events are captured in Soviet Invasion – August 1968, an exhibition that has just opened at Prague’s Old Town Hall.

Among the many striking pictures on display is of a group of young people carrying a bloodied flag through central Prague.

It was taken by Libuše Kyndrová, whose daughter Dana Kyndrová is one of the organisers of the exhibition.

“Of course the most dramatic moments took place in front of Czechoslovak Radio. People were trying to prevent the station from being occupied, because as we know the media has a huge influence. The blood on the flag is from one of the victims and the people in the picture are carrying it down Wenceslas Square, probably toward Old Town Square.” 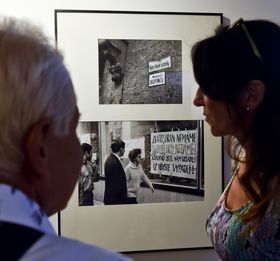 Photo: ČTK/Vít Šimánek Dana Kyndrová was 13 at the time and had accompanied her parents to the city centre.

“I found it very emotional, of course. Because everybody was hoping the Prague Spring would continue – but now it was over.”

There are around 190 images in the exhibition, the majority from Prague. They represent the work of more than three dozen photographers, most of them professional, and a number of the pictures have never before been displayed in public.

Some capture bitterly humorous improvised signs, reading, for instance, Drink your vodka, not our blood.

But most affecting are the photos that show central Prague turned into a virtual war zone – including bellowing smoke, flattened barricades and ordinary people being ferried on stretchers.

Among those at Monday’s opening was Igor, who was 20 years old in August 1968. He told Czech Radio that he had been at the top of Wenceslas Square on the first day of what became a two-decade occupation.

“There were lots of tanks. People even said they could be a load test for the metro system when they drove onto the square! People began gathering spontaneously – nobody had to be persuaded. I sometimes thought, Christ, they’re brave. I saw guys jumping up on to the tanks, piercing the fuel tanks and setting them alight.”

Despite its title exhibition the exhibition actually stretches to following spring, also capturing events such as the funeral of Jan Palach and celebrations of an ice hockey victory over the Soviets in March 1969.