Firefighters from as far as Moravia, soldiers and volunteers were setting up sand bags and metal barriers along the Vltava. Eleven years after catastrophic floods hit Prague, the Czech capital is again facing an unexpected influx of water, this time hopefully with a better outcome. 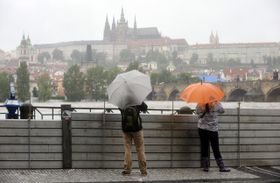 Photo: CTK Around noon on Monday water on the Vltava river was flowing at around 2,800 cubic meters per second, and authorities are expecting it to possibly rise to 3,200 cubic meters within in the next 24 hours.

Central Prague prepared most of the necessary safety measures already over the weekend. Central metro stations were closed down, although as of now, there is no water in the underground. Charles Bridge, one of the most popular tourist sites, was also closed to pedestrians, with heavy machinery set up to clear any large debris floating down the Vltava that could endanger the historical landmark. Oldřich Lomecký is the mayor of Prague’s central district. 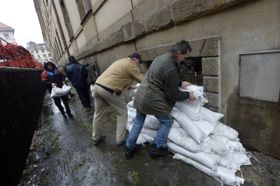 Photo: CTK “So far, we have only evacuated two people from the small Kampa island. If the situation gets worse, we will proceed with the evacuation plan, but so far we are still hoping that it won’t be necessary and the flood barriers that were set up will hold, unless the flow of the water surpasses 3,200 or at most 3,400 cubic meters per second.”

So far, the Střelecký, Cisařský, Kampa and other islands on the Vltava were at least partly flooded.

Outside of the historical center, two streams – the Botič and the Šárka – have swelled in an unexpectedly short time, flooding low-lying areas, cellars, parking lots and parks. Many parts of the Hostivář, Zaběhlice and Zbraslav areas are also flooded. Hundreds of homes have been evacuated, mostly in the south and southeast of the city. Some residents in the more central neighborhood of Smichov have been ordered to leave their homes as a precaution. 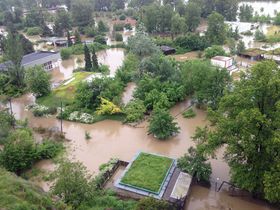 Prague Zoo, photo: CTK I spoke to Hrishabh Sandilya from the Anglo-American University in Prague, which is located near the Charles Bridge on the left bank of the Vltava. The university was closed down today as a precaution, but Hrishabh was there in the morning:

“The main building on Lázeňská street is fine, it’s on slightly higher ground, but just opposite where the other building is, near Hergetova Cihelna, there was already a bit of flooding beyond the barriers. The university buildings by the waterfront have water on the ground level at least half way. There is a lot of confusion, there are tourist groups trying to get past the police and figure out where to go. The trams seem to be running with slight delays. And it looks like the situation is getting slightly worse than when I was here yesterday.”

The Prague Zoo, which suffered massive damages and lost nearly 150 animals in the floods 11 years ago, was well prepared. Animals housed in the lower parts of the zoo complex were promptly moved to higher ground on Sunday night before the water rose.

Estimates of when the Vltava will reach its peak flow were moved from Monday morning to the afternoon, and although authorities are expressing cautious optimism, more neighborhoods may still be under threat.

The acting mayor of Prague asked schools across the city to suspend classes on Monday. All metro station in the center will be closed down for a number of days, and a some of the tram lines are not running, with additional buses and trams helping residents get across the city.

The month of July, 1997 brought devastating floods to Central Europe. The flooding began in the Czech Republic, then spread to Poland…