Seven people lost their lives, more than 8,000 people left their homes behind, and thousands worked tirelessly for three days to prevent further damage and loss of life resulting from the wide-spread flooding across Bohemia. By Tuesday, only two extreme danger zones remained in the Czech Republic, and most of the waterways that had raged only hours before had subsided. That said, parts of North Bohemia are still expecting the worst to come as the Labe continues to rise.

Prague, photo: CTK Many Prague residents were returning home on Monday night to unpleasant news: after a day of rising water on the Vltava River as well as nearby streams which flooded several neighborhoods and even whole islands in the city center, the authorities announced there was more to come: a larger swell as the series of dams upstream on the Vltava allowed the release of more water. People in the neighborhoods of Karlín and Libeň were warned they might have to leave their homes.

By morning, the worst had passed without mass evacuations in the Czech capital. The Vltava saw its peak water flow at around six in the morning on Tuesday, with over 3,200 cubic meters of water per second surging down the river. Water levels on the Berounka River, and a number of Prague streams that forced more than 500 people out of their homes, were much lower by early morning. Acting mayor Tomáš Hudeček spoke to reporters on Tuesday:

“The Vltava tributaries, such as the Rokytka, Botič and others, have significantly subsided. The water in the Botič had actually surpassed the 100-year flood level, which is completely off the charts. Now, we’re even getting a bit of sun, and if the weather does not change the flooding situation will be stabilized in Prague. The biggest challenge we are facing right now is transportation.” 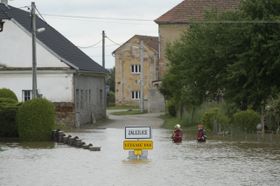 Zálezlice, photo: CTK As the Vltava slowly subsides, cleanup operations will begin around the city. Water remains in some places and damages in the hundreds of millions of crowns in Troja, Hostivař, Zbraslav have already been registered. Most of the central metro stations are expected to be closed for a number of days to come.

Although fears of massive floods in Prague proved to be unfounded, Monday night was critical for villages north of the city. The village of Zálezlice, which remembers catastrophic destruction from 2002, was flooded after a provisional dam broke on Monday night forcing more than half of the inhabitants to leave their homes. Prime Minister Petr Nečas spoke in the village on Tuesday:

“I am very sorry for the citizens who had to be evacuated and lost property. The government is prepared to help them. Right now 300 million crowns have been earmarked specifically for the recovery of municipalities, and we will offer further assistance later on. We also have four billion crowns in this year’s budget for clean up and reconstruction.”

The amount of damage caused by the flooding is still growing. The town of Mělník, which is located at the confluence of the Vltava and the Labe, began a preventive evacuation on Tuesday morning, expecting the Labe to swell to record levels later in the day. 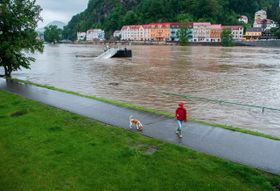 Děčín, photo: CTK Further downstream, in the north of the country, the Labe is threatening regional centers of Děčín and Ústí nad Labem. Central parts of both cities have been consistently flooding for the past 24 hours; electricity and gas have been shut off to affected areas.

So far, 1,200 people were evacuated in Děčín and more than 2,000 people left their homes in Ústí nad Labem. Some villages in the area are also being evacuated as the region braces for the worst on Wednesday morning.

The month of July, 1997 brought devastating floods to Central Europe. The flooding began in the Czech Republic, then spread to Poland…