Just a week to go and the 65th International Prague Spring Music Festival takes to the many stages of the Czech capital. This year will see more than 60 concerts, theatre performances and other events and bring some of the world’s best composers and musicians to Prague. And what’s more, young performers will also about at this, one of Europe’s most important music festivals.

It begins with a prelude, Sunday the 9th of May, as Sir John Eliot Gardiner takes the stage with the Monteverdi Choir and Prague Spring Music Festival begins for the 65th time. If you’ve followed the festival in the past then you know that the big names are going to be there this year as well: Anne-Sophie Mutter, Pierre Boulez or André Previn for example, but it is 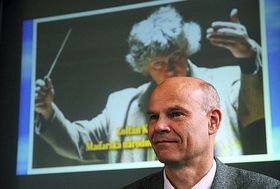 “We are beginning to distance ourselves from the 20th century and step towards the 21st, and that means very important challenges for the festival and its artistic planning. We are seeing this in the international context as well, where important global changes are taking place, like China waking up and beginning to send many a great classical musician into the world. As Czechs, we have to try a bit harder to withstand competition that is very global today. Aside from that, we also reflect the growing interests of listeners – not only in this country but around the world – in ethnic music. For this reason we are very glad to have, for example, Anoushka Shankar, who represents Indian classical music."

Prague Spring is at home in the opulent auditoriums of Rudolfinum, the Municipal House or beneath the city’s beautiful church spires, but more 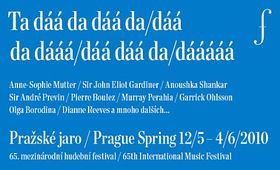 places around Prague will host the festival’s events this year, beginning with an open-air concert on Old Town Square. There the legendary rock group Blue Effect will take the stage on the Occasion of the Prague Marathon on Saturday for starters, and from there the festival will take on the whole town:

“It’s true that these legendary Prague halls of Rudolfinum and the Municipal House are not the only stages. Prague Spring of course uses a number of other venues, like the Prague Crossroads, the Church of Simon and Judith, and the Congress Centre - where the US jazz singer Dianne Reeves will be performing on May 13. There are a lot of venues for Prague Spring, we don’t want it to be only in Rudolfinum or the Municipal House, although those buildings are like a tabernacle for us.”

You can catch up with everything going on in the Prague Spring festival, which will be underway from May 12 to June 4, on www.festival.cz “My Country”: Prague Spring kicks off with performance by German orchestra founded by WWII expellees

In keeping with tradition, the annual Prague Spring classical music festival kicked off on Sunday with a rendition of Bedřich Smetana’s… 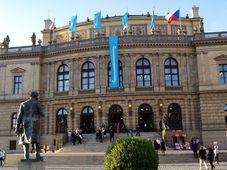 Final preparations are underway for the Prague Spring music festival, which begins on Saturday evening with the traditional rendition… The Prague Spring international music festival gets underway on Friday at Prague's Obecní dům. The festival will traditionally open…