President Miloš Zeman on Thursday delivered his first Christmas message to the nation. The ten-minute address, broadcast on public radio and television, was an uncritical reflection on his first year in office. 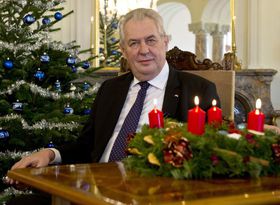 Miloš Zeman, photo: CTK The first directly elected president in the country’s history likes to set himself apart from his predecessors. And so, unlike other heads of state over the past 60 years, Mr. Zeman chose to deliver a Christmas message to the nation rather than the traditional New Year’s address. He explained that there were two reasons for this –firstly he wanted to revive the Masaryk tradition of Christmas greetings and secondly, Christmas was a time of self-reflection and looking back at the successes and failures of the past year. As a directly elected head of state Mr. Zeman said he wanted to use the occasion to account -to each and every citizen -for his actions in his first ten months in office. Photo: Prague Castle Administration The president enumerated the five promises he had made to the public in his inauguration speech – the promise to relinquish the privilege of granting pardons, improve relations with the EU, improve the situation at the Constitutional Court which had come close to paralysis for lack of judges, to donate a third of his salary to a fund for the repayment of the country’s national debt and finally to unite rather than divide the nation. He said he had delivered on each and every one of them and proceeded to explain how. Mr. Zeman said the EU flag was now flying at Prague Castle and the Constitutional Court was complete and functioning. The president said that the most problematic of his promises was that to unite Czech society rather than dividing it, but argued that in preventing the return of a centre-government to office and opening the way for early general elections he had addressed that matter as well. If there were any failures in Mr. Zeman’s book he chose to keep quiet about them. In closing, the president thanked the outgoing Rusnok government, wished the newly elected lower house much success in its endeavors and the people of the Czech Republic health and happiness in the coming year. Tomáš G. Masaryk, photo: CT24 It was probably the shortest presidential address in the country’s history and reactions to it on the political scene have been largely negative. While some welcomed the fact that it was “non-confrontational” others said it contained “nothing of any significance”. The president was criticized for giving a self-centered, laudatory speech in which he devoted no time at all to the country’s problems or any kind of vision for the future. While politicians tempered their statements, political commentators were openly scathing using expressions such as narcissistic and lacking in content – a speech that according to some “would have been better left unsaid”. They pointed out that the president had completely ignored national, political and international issues and focused solely on himself. Moreover, as Hospodářské Noviny pointed out, the speech would have been better suited to a prime minister than to a head of state – particularly to the kind of presidential role to which Miloš Zeman clearly aspires –that established by the country’s founder and first president Tomáš G. Masaryk.