Czech Prime Minister Bohuslav Sobotka and other members of the government as well as the opposition have condemned Czech President Miloš Zeman’s rejection of EU sanctions against Russia. The head of state told the Council of Europe on Tuesday that, in his view, sanctions were not working and called Russia’s annexation of Crimea “irreversible”. 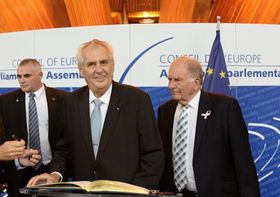 Miloš Zeman, photo: CTK The president has never been one to mince words and he certainly didn’t pull any punches on Tuesday before the Council of Europe, the institution whose aim it is to uphold human rights, democracy and rule of law on the continent – currently now headed the Czech Republic. At the meeting, the Czech head of state repeated his stance against sanctions on Russia following its annexation of Crimea from Ukraine, comparing them to US sanctions against Cuba which never succeeded in removing dictator Fidel Castro from power.

Regarding Crimea, Mr Zeman suggested the annexation was irreversible and floated the idea that compensation could be paid from Russia to Ukraine.

That drew sharp reaction from Czech politicians on twitter, including Prime Minister Bohuslav Sobotka who wrote that Mr Zeman’s speech had been in “sharp contradiction with [Czech] foreign policy”. He said that the president had no mandate to make such a statement and pointed out that the sanctions could only be lifted once Russia had honoured a ceasefire deal over the conflict in eastern Ukraine agreed in 2015.

Those who rejected the president’s words outright included Ukrainian diplomats, who called them “absolutely unacceptable” while Czech foreign minister Lubomír Zaorálek, said the statements were not in line with the Czech Republic’s position and ministry spokeswoman Michaela Lagronová suggested that questioning the sanctions before any terms had been met, would be counterproductive, to say the least. 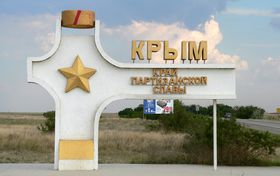 Crimea, photo: Roman Kondratjew (RomWeb) via Foter.com / CC BY-NC-ND “The annexation of Crimea is still continuing. So if we are talking about sanctions against Russia, these were agreed by the European Council in connection with full compliance with the agreements reached in Minsk.

“Any kind of revaluation of the sanctions without the terms being met, would mean questioning the credibility of European leaders.”

The president’s words were set to be debated on Wednesday in the Czech Senate: the chairman of the Committee on EU Affairs, Christian Democrat Václav Hampl, who called parts of Mr Zeman’s speech highly problematic, made clear that the Senate had a duty to respond to the matter.

Debate on Mr Zeman’s speech was supported by both the Social and Civic Democrats. It is not the first time the president has gone his own way diverging from the government on foreign policy.