The wheat beer Primátor Weizenbeer has been named the world’s best beer in an international tasting competition. The Czech brew, produced by the east Bohemian Primátor brewery, became the overall winner of the 2013 World Beer Awards, and was also awarded as the best wheat beer. Praised for its balanced fruity taste, great body and spicy finish, Primátor Weizenbeer has been a pioneer in reviving a particular style of beer that has nearly died out in the Czech Republic. I spoke to exports manager of the Primátor Brewery, Romana Jansová. 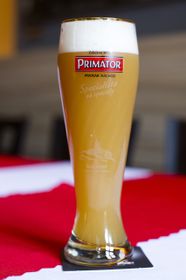 Photo: CTK “It’s an incredible achievement for our brewery. It’s fantastic, it’s great news. This could be one-in-a-lifetime success, and it’s great that Primátor won. So it’s wonderful news.”

Can you tell us something about Primátor Weizenbeir? The jury said it had an enticing nose, with loads of ripe bananas, clove, bubblegum and candy. What kind of beer is it?

“Weizenbier is a German-style wheat beer. It’s brewed from wheat and it’s not that typical for Czech beer production. We mostly make lagers but Primátor has been a pioneer in speciality beers, and Weizenbier was the first such beer produced in out brewery ten years ago.”

How do you get the fruity tones into the beer?

“Part of it comes from the various kinds of wheat we use. Another reason is the yeast. For Weizenbier we use different yeast. Also, this beer is top-fermented which gives it the fruity, banana taste.”

So you don’t put any bananas in the beer?

“No, we don’t. That comes from the yeast which works for the beer this way.”

Has Primátor Weizenbeer become popular with Czech beer drinkers since it was introduced? 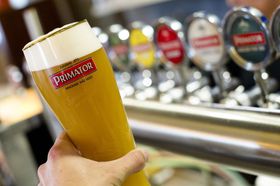 Photo: CTK “The Czech beer market is a little different. It has been hard to educate people; we first had to explain that there is nothing wrong with a beer that’s not clear because it has yeast in it. So we first had to educate people about what wheat beer was. But is has since become popular here but it’s still more popular abroad where consumers are more aware and educated about weizenbier.”

How do you think the award will help your sales?

“Well, I think it will help. This award is a great encouragement for all of us, and it’s perfect reference for entering new markers and bringing in new business. So I would say it could not be better for our exports as it will bring attention to our brewery. I have already received so many positive reactions from our customers so I’m positive that it will work great for our company.”