The Czech government is intensifying its drive to help Czech producers establish and boost their presence on the Chinese market. On a five day working trip and trade mission to China, Prime Minister Bohuslav Sobotka pushed ahead with lucrative deals in the fields of aviation, agriculture, finance and health care. 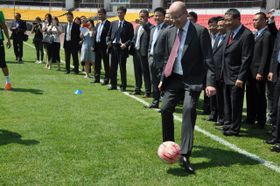 Bohuslav Sobotka, photo: CTK Pictures of Prime Minister Sobotka playing football at a Chinese soccer club reveal the range of fields where the two countries are now cooperating. A Chinese energy company has bought a majority stake in Slavia Prague, one of the Czech Republic's oldest soccer clubs, and ties with a club in Beijing have followed. And the Czechs are also lined up to help China develop its ice hockey talent.

Away from sport, Czech companies are vying with 15 other countries from Central and Eastern Europe to get a bigger foothold in the world’s second biggest economy. These range from Škoda Auto, which already has manufacturing plants in China and has sold 1.7 million vehicles in the country, to the Lobkowitz brewery, outdoor clothes and equipment producer Alpine Pro, and the famous Czech herbal liquor Becherovka. They are among Czech producers boasting the biggest national stand at a special trade exhibition in the Chinese capital.

The Czech government is hoping that milk and pork exports to China could help Czech farmers face up to a milk and pork glut on European markets which have caused prices to plummet. Czech farmers complain their woes have been exacerbated by dumping of production by rivals, that is selling goods for less than the production costs.

During the visit, the South Bohemian dairy company Madeta signed a deal to deliver 100 million crowns worth of milk to China a year. Czech beer brewers are also trying to gain a firmer foothold on the Chinese market as are Moravian wine producers, who also presented their products at the Beijing trade fair. 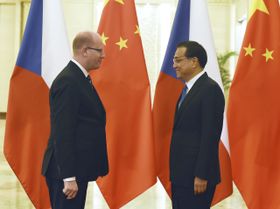 Bohuslav Sobotka, Chinese Premier Li Keqiang, photo: CTK The visit also yielded results in the field of aviation, with a memorandum committing Chinese investment in joint aviation projects. Prime Minister Bohuslav Sobotka highlighted this as one of the biggest successes of the talks on Sunday.

“Several projects are taking shape. The Chinese company Wanfeng Auto Holding will invest 100 million dollars (2.4 billion crowns) into a joint aviation project in which plane parts for light and medium aircraft would be produced in the Czech Republic and assembled in China.”

The trade mission also brought results in the spheres of health and wellbeing. Chinese investors are set to build a brand new spa resort in the small South Moravian town of Pasohlávky, investing close to 2 billion crowns and creating some 500 new jobs.

And last but not least, the talks centred on cooperation in the field of finance and the Czech Republic’s efforts to attract Chinese banks to the Czech Republic. The Industrial and Commercial Bank of China has plans to open a branch in Prague, signing a memorandum to that effect with Czech representatives.

The Speaker of the Czech Senate Miloš Vystrčil will lead a trade mission to Taiwan in August, he announced at a press conference on…