The Prague Institute of Planning and Development has unveiled the new Metropolitan Plan for the Czech capital that should come into effect in the year 2023. Among other things, the new strategic plan introduces building height regulation and attempts to prevent the city from sprawling into the surrounding countryside. 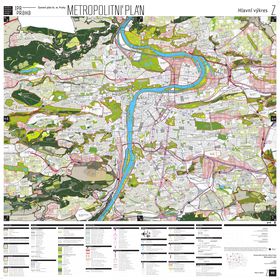 New Metropolitan Plan, photo: Prague Institute of Planning and Development The new Metropolitan Plan, introduced by the Prague Institute of Planning and Development on Tuesday should replace the old land use plan adopted back in 1999. The mayor of Prague, Adriana Krnáčová, highlighted its importance, saying it expressed a vision for the city for decades to come.

Kateřina Glacnerová from the communications department of the Prague Institute of Planning and Development outlined the most significant changes:

“The first biggest difference is the building height regulation. Although the new Metropolitan Plan stabilises and protects the values of the current Prague high altitude composition, it also identifies some places in the city where new buildings could emerge that would be higher than usual.

“The second difference is that the new Metropolitan Plan highlights border lines that surround the city which prevent the city from spreading into the distance.

“It also identifies transformation areas inside the city where new buildings and new districts could emerge. The city should now be built from the centre rather than spreading outward.”

Among the locations that should see further construction in the future are areas surrounding the city’s train stations, such as Bubny, Žižkov freight station or the train station at Smíchov. The environmental NGO Arnika has criticised the intention to increase the building density within the city, arguing that it will happen at the expense of the city’s parks and sports grounds.

Among other things, the new Metropolitan Plan will take into account not only the function or use of different sites but also their character and their location within specific city districts, introducing a plan for their regulation.

It will also focus on revitalizing existing parks and selecting new locations for parks in districts that are lacking greenery. Prague - Žižkov, photo: Wikimedia Commons, Public Domain People can get acquainted with the new Metropolitan Plan in the Centre for Architecture and Metropolitan Planning in Prague as of April 27. It will also be available online on the website of the city and the Prague Institute of Planning and Development.

Kateřina Glacnerová outlines what the further process of approving the plan will look like:

“From June 27, citizens and institutions will have 30 days to submit their objections. We expect to receive around a thousand. Afterward, these objections will be taken into account and the plan will be modified accordingly.

“The final plan should be adopted by the City Council in 2023 but it will really depend on how many objections we will receive and whether we decide to implement them or not.”