A new project by Prague Zoo, together with the City of Prague, will allow for the creation of a new paddock for some of the zoo’s Przewalski horses. At one time the horse was extinct in the wild, but over decades the zoo played a major role in their breeding and their eventual return of the horses to their natural habitat. 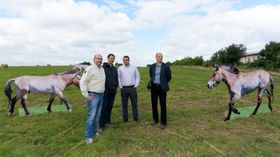 Photo: archive of Prague Zoo Przewalski horses, once extinct in the wild, have long been a crowning achievement of Prague Zoo- The zoo received its first Mongolian wild horses in the 1930s and began breeding them later. The City of Prague, which this year donated 6.5 million crowns for care of Przewalski horses here, this week announced an agreement for some 20 hectares at Dívčí hrady above Prokop Valley, to be used as a special grazing grounds and paddock. Alena Šteffelová, the head of the press office at Prague Zoo, told Radio Prague more about the project:

“The idea was Petr Štepánek’s - the mayor of Prague 4. He lives in the area of Dívčí hrady and looking out at the valley, it occurred to him that it might be a suitable spot for a paddock where the horses could run, graze, or even be bred. The mayor went to school with the head of Prague Zoo, Miroslav Bobek, so he took the idea to him and they went from there.”

“The area, Dívčí hrady, has always had a steppe-like character, so it is suitable. The City Of Prague then got involved as well as Deputy Mayor Petr Dolínek. We announced the project just this week. As it stands, we now have two years to prepare the grounds together with infrastructure and fencing. At the start there should be four mares and eventually a stud horse will be added. The site should be ready by 2019.” 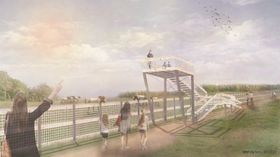 Photo: archive of Prague Zoo According to Ms. Šteffelová, the site will also include a number of lookouts for visitors to get a better view of the animals and the surrounding area and the cityscape of Prague.

“Visitors at the paddock will be able to walk around and see the horses from a number of designated but also a raised lookout from which to see not only the animals but also get a good view of Prague.”

Amid the doom and gloom of the coronavirus epidemic, Prague Zoo has announced a piece of good news: the birth of an elephant calf.…