The large-scale regional exhibition taking place in two South Bohemian and two Upper Austrian cities hit the first snag within days of the grand opening. Part of the exhibit in the small town of Vyšší Brod, which is dedicated to the houses of worship in the region, sparked intense criticism for displaying works dating back to darker days in history. 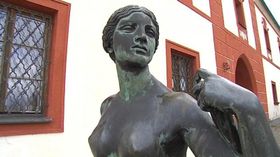 Photo: Czech Television Organizers in Vyšší Brod hoped to attract the public’s attention with the prized encrusted Záviš cross that was put on display in the local monastery, but completely different artifacts stirred the biggest controversy.

Two days after the exhibit opened last week, three statues displayed in the gardens surrounding the church had to be removed, following emphatic complaints from the visitors. The reason is that the statues were once part of an art collection that belonged to Adolf Hitler.

Two sculptures by Hermann Zettlitzer from the north Bohemian Duchcov and one by a German sculptor Wilhem Wandschneider were in Vyšší Brod since the 1940s, but their origin was obscured since the end of the war. Only three years ago, publisher and author Jiří Kuchář uncovered their history, when they were on display at the Hluboká chateau:

“These statues, just as all the sculptures in Vyšší Brod during the war are part of a purchase that Adolf Hitler made at the Great German Art Exhibits in 1939 and 1940. I really don’t think that any of these three sculptures can be described as Nazi art. Before I made it public that they belonged to Adolf Hitler, everyone liked the statues at Hluboká very much. All of a sudden they became a problem, but the statues themselves are not to blame for this.” 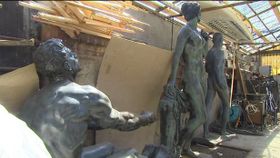 Photo: Czech Television The curators and organizers of the exhibit chose originally to display the pieces to show a part of the history of the Vyšší Brod monastery, which served as a storage facility for a part of Hitler’s art collection, which included these particular sculptures. Jiří Kuchář explains:

“Hitler had the monastery cleared out in the spring of 1941. He had quite a lot of art at that point and he needed a place to store it. This monastery, which was in a fairly secluded location in the middle of the woods, was perfect for this. So, he brought the Mannheimer and the Rothschild collections there, and almost by accident they moved 44 paintings and 30 sculptures there from Munich.”

The regional exhibit that in addition to Vyšší brod is taking place in Český Krumlov, and the Austrian Bad Leonfelden and Freistadt is meant to show the common and divisive history of the neighboring areas. Some of the exhibits in Austria do not shy away from discussing the Second World War and the Nazi regime. The organizers of the exhibit in Vyšší brod did expect the statues collection to be controversial, but were still caught off guard by criticism they received, curator Jiří Franc confirmed. 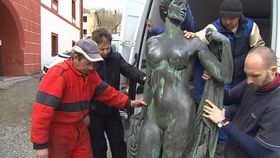 Photo: Czech Television Most of the criticism, Franc told the media, was from Czech visitors though. The Austrian side mostly praised the curatorial decision to include the sculptures, saying that the past of the region needed to be remembered, so that it would not be repeated.

It is still unclear where the three statues from Vyšší Brod will find a new home, and whether the public will have a chance to see them. 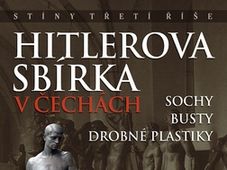