Puppets take to the streets

To brighten up a cold cloudy Prague this week, the Teatro Toc Puppet Theatre has taken to the streets. The local company is presenting an International Street Puppet Theatre Festival that has a dynamic cast of artists from all around the world. The performances this week are the final stretch of a twenty day workshop during which participants have designed and carved wooden marionettes, and then rehearsed a condensed version of Romeo and Juliet, performing it over six days. The director Marek Becka chose the classic tale as a story familiar to all the multicultural and international cast. Kay Grigar saw the company's premier Tuesday night.

And so the story begins - the tragic romance of Romeo and Juliet. The clanking sounds you hear are wooden marionettes making their first entrance on set, exposing their brilliant craftsmanship. The actors manipulating them bring the intricate wood puppets to life and the cast of this week's festival is a dynamic group of artists from a wide array of disciplines and from all corners of the world: Australia, Japan, Finland, Spain, the United States and the list goes on as eight countries in total, including the Czech Republic itself, are represented in a cast of nine. The festival is in its third year and was founded by actor/director Marek Becka, puppet and toy designer Mirek Trejtnar and his wife, Leah Gaffen. As Czech puppetry has a long tradition in the Czech Republic, the three enthusiasts responded to increasing foreign interest in studying the art form.

To finish off two weeks of intensive preparation, workshop participants will be performing for the next five days. In keeping with the tradition of Czech Travelling Caravans of the 19th century and early 20th century, this puppet performance can move from place to place and will be performed in various locations in Prague and at Svojanov Castle. The twenty-minute adaptation of Shakspear's tragic love story is quirky, visually interesting and musically buoyant.

During the Hapsburg Empire the Czech Travelling Caravan was instrumental in preserving the Czech language, and in this performance director Marek Becka wanted each performer to perform in their native tongue.

But in saying that... the story of Romeo and Juliet is conveyed through the universal language of puppeteering and highly reliant on the conviction of the performers. I managed to speak to the enthusiastic cast after the show and asked them how they chose which puppet they created.

"We submitted designs for more than one puppet and the cast was chosen out of our designs that we submitted, so we would build according to who was cast."

What was your character?

"I'm an angel but actually I also made the fireman because I wanted to be the character that conveyed the strong emotions of the play. But now I'm the angel that explains the plot."

It's a beautiful puppet.

So you've only been working for thirteen days. How was the process for you?

"A lot of fun and hard work but I think we were just enjoying ourselves."

Enjoyment was truly apparent in their performance. Tristan is a performer and visual artist from Tasmania, Australia and proud creator of Juliet. He said it was his favourite aspect of the creation process.

"Seeing it turn from a block of wood, like a robot, into a beautiful woman."

Did you create Juliet?

So you don't actually play the character that you created?

"No, I just couldn't get the voice right"

For times and locations of performances just take a look at the Teatro Toc website: www.teatrotoc.kidpraha.cz/english.htm 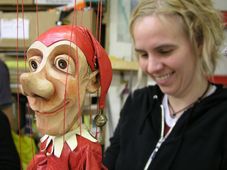 Leah Gaffen on 15th anniversary of Puppets in Prague 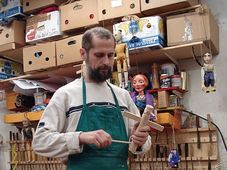 For the tenth year in a row, a small workshop in the Prague neighbourhood of Vršovice is hosting a group of students from the US, India,… Waiting for a train among puppets

Masarykovo nadrazi train station in Prague is not exactly the most poetic of places. You hardly raise your eyes to admire the beauty…